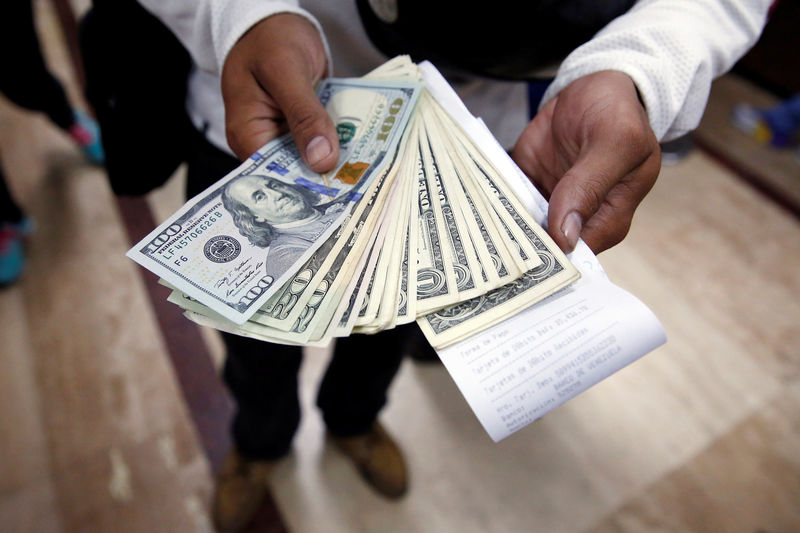 SINGAPORE (Reuters) - The dollar and yen held the safe-haven high ground on Tuesday, with investors on edge ahead of a looming tariff deadline, the UK election and upcoming central bank meetings in Europe and the United States.

Front of mind is whether Washington will go ahead with a fresh round of tariffs on Sunday, or whether a deal with China can be reached before then.

"Trade's still the flip-floppy factor, but I think markets are still reasonably upbeat about risk-seeking. All these little movements are only smoke and noise and don't really tell you what's going on. Cautiously positive would be the overall mood."

Against the Japanese yen and the euro (EUR=) the greenback found support after last week's declines, steadying at 108.56 yen and $1.1064 per euro. Against a basket of currencies, (DXY) the dollar last traded at 97.644.

The Australian and New Zealand dollars were marginally stronger at $0.6824 and $0.6548 , respectively.

The U.S. dollar's recovery after weakness last week has been supported by a surge in hiring in November.

That has investors almost certain that the U.S. Federal Reserve will hold rates steady on Wednesday, which has increased investors' focus on finding a trade-war truce.

China said on Monday it hoped to make a trade deal with the United States as soon as possible, though gave no new details or insight into talks' progress.

Elsewhere, the European Central Bank is likewise expected to keep interest rates steady, while the pound's fate is in the hands of voters at Thursday's British election.

Sterling sat at $1.3144, just below a seven-month high hit last week, as polls pointed to a Conservative victory decisive enough to secure a parliamentary majority.

A YouGov poll due at 2200 GMT will offer the latest guide.

"If the UK bookies' prices are a reasonable guide to market expectations for Thursday's election, it is hard to see much more upside for GBP on the outcome," said Adam Cole, chief currency strategist at RBC Capital Markets.

"Despite the confidence with which markets predict a Conservative victory, there are still several major uncertainties," he added, pointing to unpredictable turnout and polling showing a sizeable chunk of undecided voters.