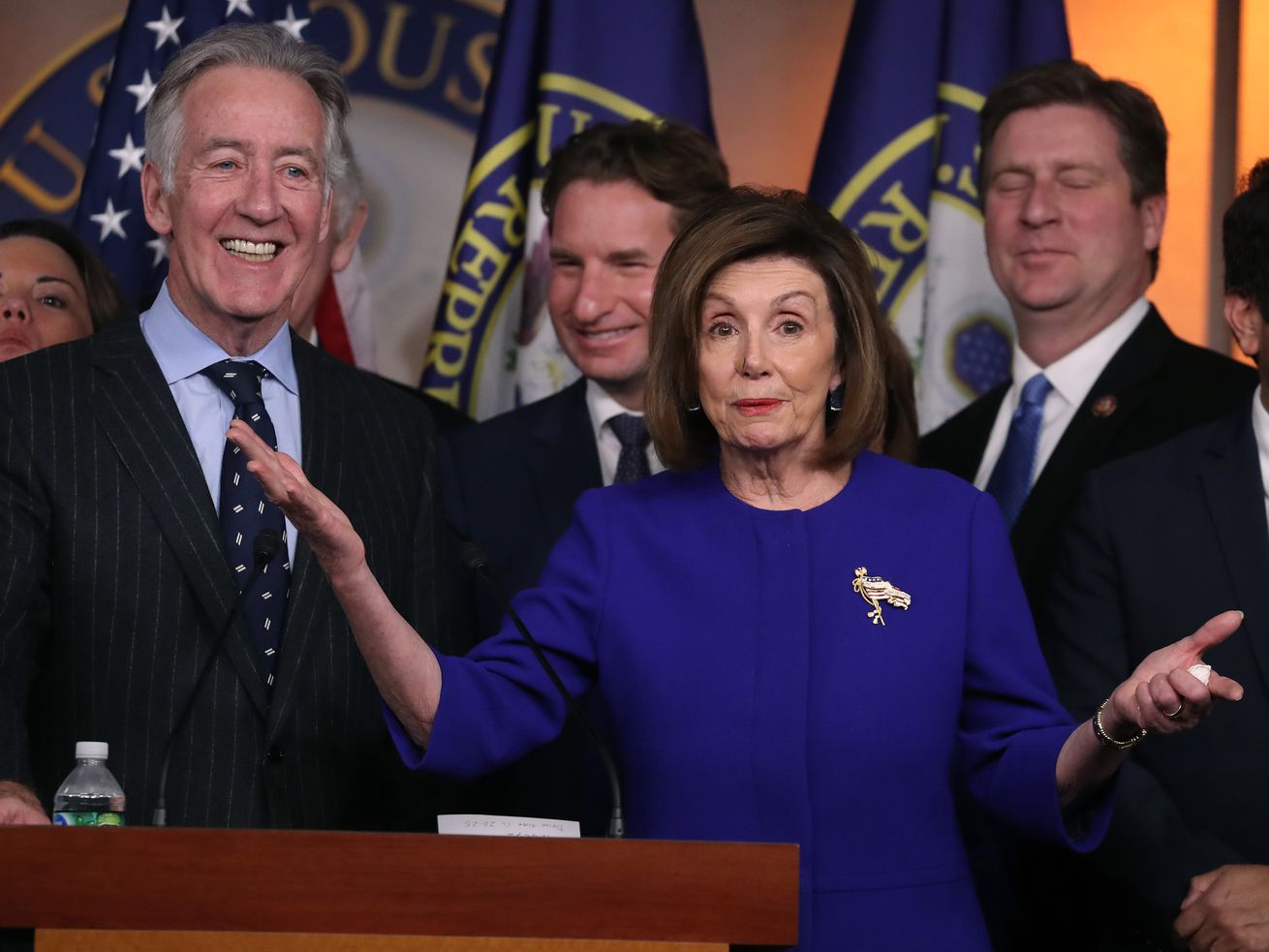 House Democrats and the Trump administration agreed to tweaks on the United States Mexico Canada Agreement, paving the way for its implementation.

It’s official: There is now a revised revised NAFTA.

Democrats are supporting the agreement now that they’ve secured changes to the deal, achieving concessions on labor and environmental rules and enforcement, prescription drugs, and other provisions that had long been sticking points between House Democrats and the administration.

“There is no question, of course, that this trade agreement is much better than NAFTA,” House Speaker Nancy Pelosi said at a press conference Tuesday. “But in terms of our work here, it is infinitely better than what was initially proposed by the administration.”

The tweaks Democrats negotiated — which received the critical endorsement of US labor organizations — require Mexico and Canada to sign on to the alterations. The Trump administration’s top trade representative, Robert Lighthizer, and his counterparts in Canada traveled to Mexico City on Tuesday to meet with Mexican officials to finalize the changes and participate in a signing ceremony.

All three countries will still need to ratify this new version of the USMCA. Mexico ratified the original USMCA in June, but it must approve these changes and the deal must go through Congress and Canada’s parliament. Now that Democrats have accepted this deal, the USMCA should pass Congress, and Canada is likely to follow suit.

It’s a big victory for President Trump, who made renegotiating the deal one of his key campaign promises. But it comes at an incredibly weird time: Pelosi announced the breakthrough at a press conference about an hour after she held a separate press conference to announce that Democrats were moving forward with two articles of impeachment against the president.

House Democrats largely dismissed the awkward timing. “Sometimes they coincide — there’s not much you can do about it,” Rep. Richard Neal (D-MA), the chair of the House Ways and Means Committee, said Tuesday. “I repeatedly noted that when we got the agreement, we would go with it.”

We are now experiencing an even stranger phenomenon (at least in this age of polarization): a world in which congressional Democrats and the Trump administration worked together to craft legislation that both Democrats and President Donald Trump can count as a victory.

Looking like very good Democrat support for USMCA. That would be great for our Country!

The US, Mexico, and Canada struck a last-minute agreement last fall on a revised NAFTA (now called the USMCA), which the leaders of all three countries signed in November 2018.

But the House Democrats’ objections to some provisions of the deal became the biggest hurdle to implementing the new agreement. Specifically, they took issue with labor and environmental standards, and enforcement mechanisms for those rules, and other issues such as the provisions surrounding pharmaceuticals.

House Democrats had been working with US Trade Representative Lighthizer for months on making tweaks to it. (At the press conference, Neal joked about the many times he and Lighthizer had hung up the phone on each other in anger during the tense negotiations.)

And on Tuesday, Democrats claimed success. “USMCA will deserve a vote because it’s an agreement that Democrats shaped,” Neal told reporters.

They said they’d strengthened rules for workers, including additional protections to make sure Mexico is meeting these standards. As part of USMCA, Mexico agreed to pass new workers’ rights laws, including guaranteeing the right to unionize and negotiate labor contracts. The updated USMCA will establish a committee to monitor Mexico’s progress and benchmarks for Mexico to meet. If it does not, it could lead to penalties.

Another big win for Democrats was the removal of a certain rule involving pharmaceuticals. The original USMCA extended the period that certain drugs (known as “biologics”) can be protected from generic competition to 10 years (it’s already 12 years in the US). Democrats objected to this provision, saying it could potentially thwart future efforts to lower the cost of some prescription drugs. That provision has now been removed from the USMCA.

Democrats are selling the revised agreement as a “true transformation” of the original USMCA, according to a fact sheet from the House Ways and Means Committee.And the concessions they got from the Trump administration were evidently sufficient to finally secure the much-needed backing of the AFL-CIO, America’s largest labor federation, which had previously resisted the deal.

“Make no mistake, we demanded a trade deal that benefits workers and fought every single day to negotiate that deal; and now we have secured an agreement that working people can proudly support,” Richard Trumka, the AFL-CIO president, said on Twitter.

Already included in the USMCA were new rules that said cars must have 75 percent of their components manufactured in Mexico, the US, or Canada to qualify for zero tariffs (up from 62.5 percent under NAFTA) and provisions that40 to 45 percent of automobile parts must be made by workers who earn at least $16 an hour by 2023. (Now with increased enforcement, per the Democrats.)

The USMCA also adds a 16-year “sunset” clause —meaning the terms of the agreement expire, or “sunset” after 16 years. The deal is also subject to a review every six years, at which point the US, Mexico, and Canada can decide to extend the USMCA.

In April, the US International Trade Commission’s analysis estimated that the new USMCA will offer a very minor benefit to the US economy. But winners and losers in trade deals aren’t always easy to predict. NAFTA was also supposed to protect workers, but it largely failed to do so. Both the Trump administration and Democrats have tried to bolster those protections, as part of a larger revisiting of the 25-year-old trade deal.

The deal still has its critics, though. Some Republicans grumbled that Pelosi should have come to the table sooner, suggesting the timing was a political ploy. At least one Republican — Sen. Pat Toomey (R-PA) — suggested the Democratic changes went too far. “If people think free trade is important, they’ll presumably see it as the step backward that I see it as,” Toomey said Tuesday.

And some Trump opponents are concerned Democrats just handed the president a massive win to campaign on in 2020.

Democrats are undoubtedly giving Trump a win ahead of the 2020 election. But it’s a win for Democrats, too.

Trump has called NAFTA “our Country’s worst trade deal” — and he is now very close to having fulfilled his 2016 campaign promise to renegotiate it.

Realistically, the USMCA is an updated version of the 25-year-old NAFTA pact, but it does make some big changes. But the White House is still touting it as “the biggest and best trade agreement in the history of the world.” And whether Democrats like it or not, it’s going to be a signature legislative victory for him.

But it’s also a win for the Democrats,who held out for months trying to work out an agreement with the administration that would tighten enforcement on workers’ rules and environmental standards and get the backing of its Democratic members and labor unions. (And that Canada, and especially Mexico, would still support.) And Democrats certainly believe they’ve achieved a better USMCA deal.

Democrats have also eliminated an impeachment talking point from Trump and Republicans, who’ve accused Democrats of obstructing the USMCA because they’re more interested in taking down the president.

Democrats in more moderate districts were reportedly particularly nervous about leaving USMCA unresolved before the end of the year, and now they’ll have a legislative victory to take home, showing that they can still work with the administration on issues that benefit the American people — even as they’re holding the president accountable for his conduct.

Lighthizer — Trump’s trade guy — called the deal truly bipartisan at the signing ceremony in Mexico on Tuesday, acknowledging the work it took to get everyone within the US to agree, along with Mexico and Canada.

“After working with Republicans, Democrats, and many other stakeholders for the past two years we have created a deal that will benefit American workers, farmers, and ranchers for years to come,” Lighthizer said in a statement. “This will be the model for American trade deals going forward.”

And politics aside, the USMCA on the verge of being finalized will end uncertainty for tens of thousands of workers and businesses in all three countries whose livelihoods are impacted by the trade agreement. Trump had previously threatened to tear up NAFTA altogether if his trade deal didn’t go through. Now, it seems the hugely important hemispheric trading relationship will remain intact, and uninterrupted.

The House will vote on the USMCA legislation before Congress breaks for recess for the holidays, probably around the same time it votes on impeachment. The Senate must also take up the USMCA — though Majority Leader Mitch McConnell has indicated that the body won’t consider it until after Trump’s impeachment trial in January.