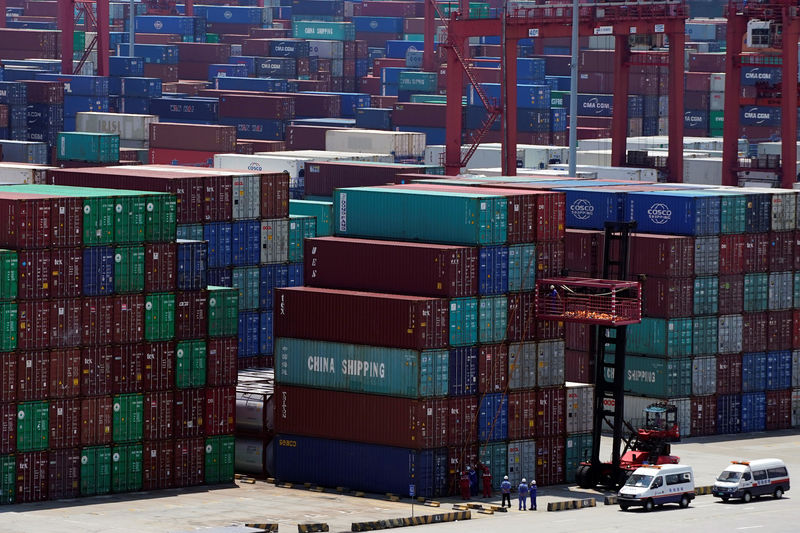 © Reuters. Containers are seen at the Yangshan Deep Water Port in Shanghai

BEIJING (Reuters) - China's exports in November shrank for the fourth consecutive month, underscoring persistent pressures on manufacturers from the Sino-U.S. war but growth in imports may be a sign that Beijing's stimulus steps are helping to stoke demand.

The 17-month long trade dispute has heightened the risks of a global recession and fueled speculation that China's policymakers could unleash more stimulus as growth in the world's second-largest economy cooled to nearly 30-year lows.

Overseas shipments fell 1.1% from a year earlier last month, customs data showed on Sunday, compared with a 1.0% expansion tipped by a Reuters poll of analysts and a 0.9% drop in October.

Imports unexpectedly rose 0.3% from a year earlier, marking the first year-on-year growth since April and compared with a 1.8% decline forecast by economists.

The better-than-expected import data may point to firming domestic demand after factory activity showed surprising signs of improvement recently, although analysts have noted the recovery could be difficult to sustain amid trade risks.

China's trade surplus for November stood at $38.73 billion, compared with an expected $46.30 billion surplus in the poll and a $42.81 billion surplus recorded in October.

Beijing and Washington are negotiating a first phase trade deal aimed at de-escalating a trade dispute but they continue to wrangle over key details.

U.S. President Donald Trump said on Thursday trade talks with China are "moving right along," striking an upbeat tone even as Chinese officials held fast to their line that existing tariffs must come off as part of an interim deal. Earlier in the week, though, Trump rattled global markets when he said a deal might have to wait until after the 2020 election.

Top White House economic adviser Larry Kudlow said on Friday that a Dec. 15 deadline is still in place to impose a new round of U.S. tariffs on some $156 billion of China's remaining exports to the United States, but the president likes where trade talks with China are going, he added.

One Chinese official told Reuters that China will implement its own tariffs as a countermeasure if the Dec. 15 tariffs go into place, which may dash any chance of a near-term trade deal.

Trump has demanded that China commit to specific minimum purchases of U.S. agricultural products, among other concessions on intellectual property rights, currency and access to China's financial services markets.

China's trade surplus with the United States for November stood at $24.60 billion, according to Reuters calculations based on customs data, easing from the previous month's surplus of $26.45 billion.

China confirmed on Friday that it will waive import tariffs for some soybeans and pork shipments from the United States.

Imports of copper rose 12.1% on the previous month as an improvement in the manufacturing sector stoked higher demand for the red metal, customs data showed on Sunday.

China's official factory activity gauge returned to growth for the first time in seven months in November, with a private survey showing activity expanding at the quickest pace in almost three years.

Iron ore imports fell for a second straight month in November, pulled down by falling shipments from top miners in Australia and Brazil despite firm demand at mills.

Despite the growing strains on the economy, Beijing remains reluctant to implement major stimulus for fear of heightening financial risks given already high levels of debt.

Authorities have instead opted for more targeted measures such as incremental interest rate reductions and bringing forward 1 trillion yuan ($142.1 billion) of the 2020 local government special bonds quota to this year.

People's Bank of China Governor Yi Gang reiterated in a signed article published last week that China will not resort to quantitative easing and is committed to maintaining a prudent monetary policy.