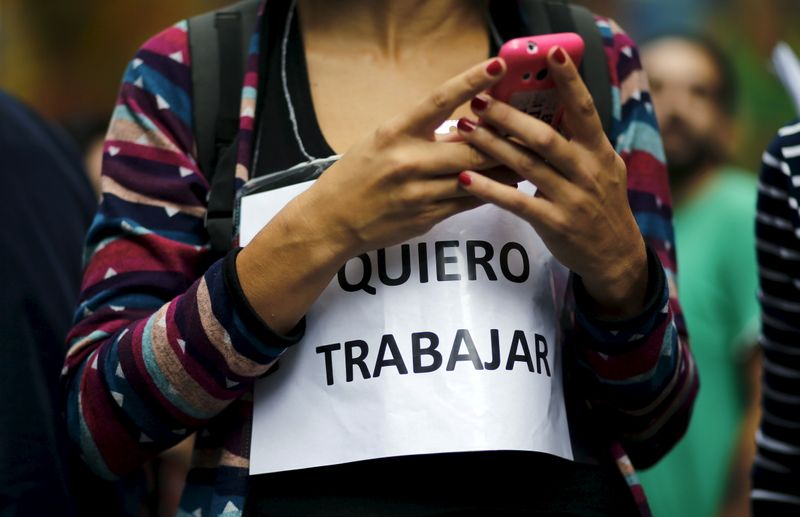 © Reuters. FILE PHOTO: A state worker looks at her phone while wearing a sign outside the Labour Ministry, during a protest against layoffs, in Buenos Aires

BUENOS AIRES (Reuters) - Argentine workers fired without just cause over the next 180 days will be paid double the normal exit package under a decree announced over the weekend, as the new government breaks with the pro-business stance of the previous administration.

The "Decree of Need and Urgency" says in cases of dismissal without just cause during the term of the decree, "the affected workers will have the right to receive double the corresponding compensation in accordance with current legislation".

Peronist President Alberto Fernandez was sworn in on Tuesday, promising an end to outgoing leader Mauricio Macri's pro-business policies, as inflation roars at above 50%, poverty increases and economic growth sputters.

The new economy minister on Wednesday said Macri's fiscal tightening measures had failed, and that the new administration would emphasize economic growth over the deficit reduction program that was at the heart of Macri's push to re-integrate Argentina with the international financial markets.

Argentina's unemployment rate rose to 10.6% in the second quarter of 2019, a percentage point higher than a year earlier, the government said in a press release announcing the decree.

Young people were especially hard hit, it said, with young women suffering a jobless rate of 24%.

"By decision of President Alberto Fernandez, the public emergency in occupational matters is declared in view of the need to stop the aggravation of the labor crisis," the press release announcing the decree said.