Home Economy Without a China trade deal, the U.S. will hike tariffs: Trump

Without a China trade deal, the U.S. will hike tariffs: Trump 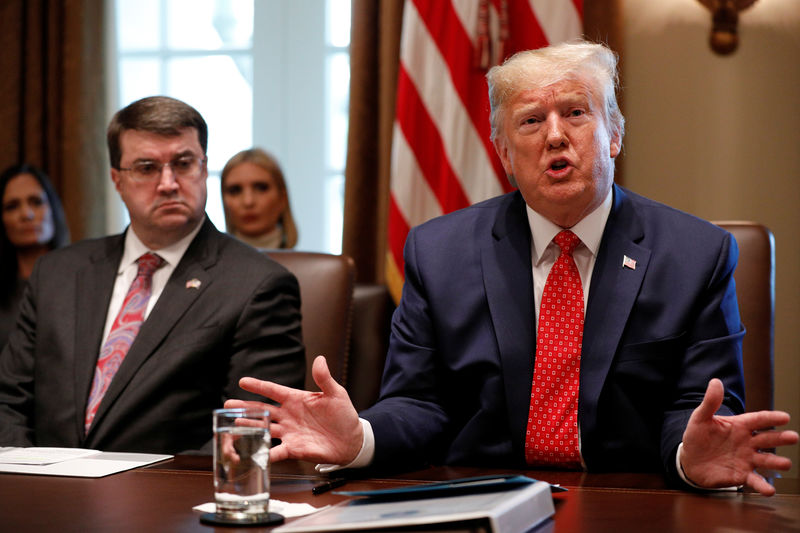 © Reuters. U.S. President Donald Trump hosts a Cabinet meeting inside the Cabinet Room of the White House in Washington

WASHINGTON (Reuters) - The United States would raise tariffs on Chinese imports if no deal is reached with Beijing to end a trade war, U.S. President Donald Trump said on Tuesday, threatening an escalation of the spat that has damaged economic growth worldwide.

Speaking at a cabinet meeting at the White House, Trump said he had a good relationship with China, noting that China was "moving along." However, he said China would have to make a deal "I like."

"If we don't make a deal with China, I'll just raise the tariffs even higher," he told a room filled with senior U.S. officials.

The United States and China have been locked in successive waves of tit-for-tat tariffs that have roiled financial markets and threatened to drag growth in the global economy to its lowest rate since the 2007-2008 financial crisis.

Hopes were high that a partial trade deal could be signed at a summit in Santiago, Chile that was scheduled for mid-November. The summit was canceled amid unrest in Chile and a path forward for a deal remains unclear.

Sticking points include how and when to reduce tariffs and how much U.S. agricultural products China would commit to buy.

White House economic adviser Larry Kudlow said last week that the two countries were getting close to an agreement to end the 16-month-long trade war, but he gave no further details on the timing of a possible deal.