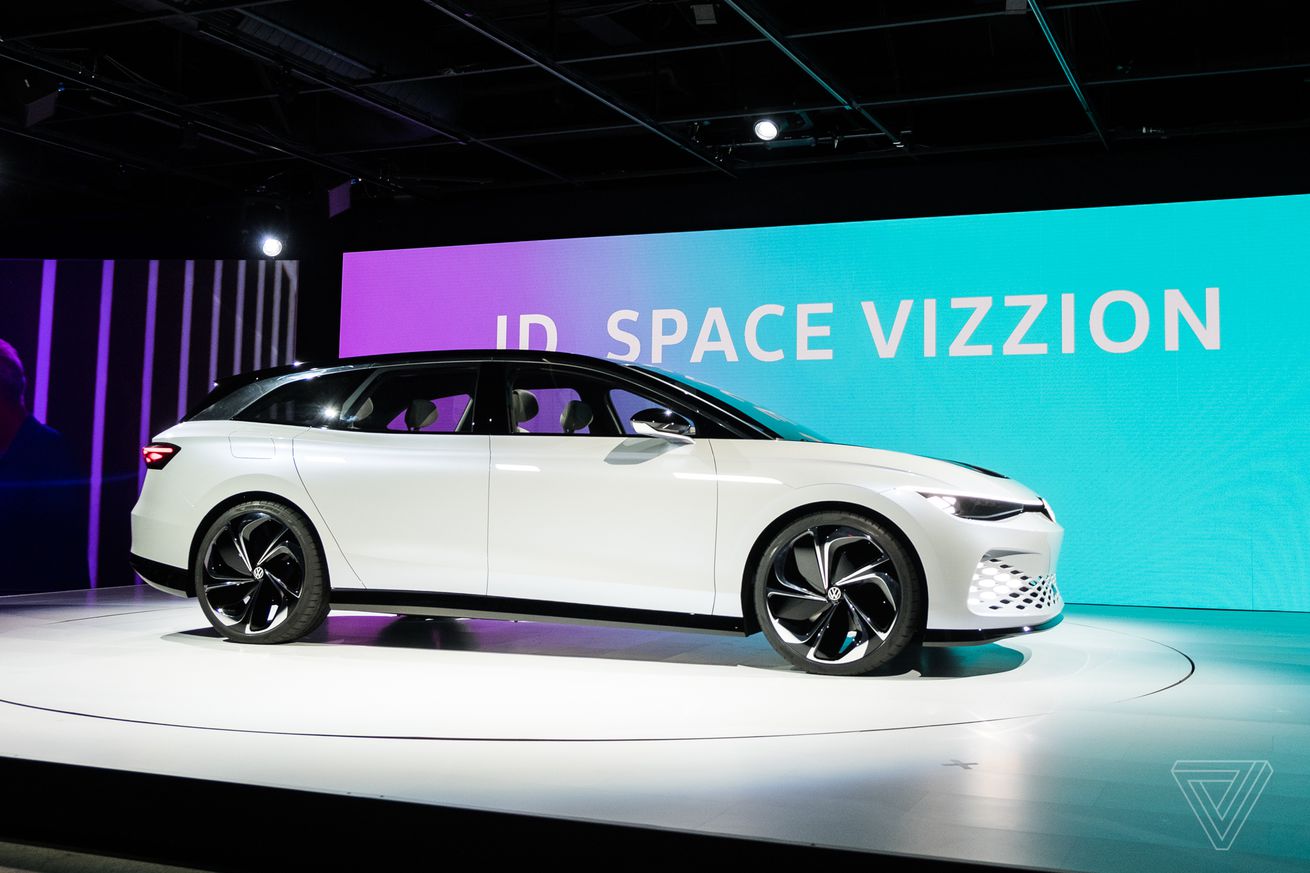 With electric longboards in the trunk

The newest addition to Volkswagen’s forthcoming lineup of electric vehicles was just revealed at the 2019 LA Auto Show, and it’s an EV wagon called ID Space Vizzion. Shown off in concept form only, VW is saying the eventual production version will squeeze 300 miles of EPA-estimated range out of an 82kWh battery, though the company has not run the vehicle through any real EPA testing yet. VW said it may come to the United States in 2022.

The ID Space Vizzion is, perhaps unsurprisingly, a more spacious variant of the ID Vizzion sedan concept VW showed off at the 2018 Geneva Motor Show. Sitting on massive 22-inch wheels, the car measures 195.2 inches in length — a good 10 inches longer than the 2020 Tiguan SUV, and nearly as long as the 198.3-inch Atlas SUV.

It’s the seventh car to join the ID lineup

The new concept car is the seventh entry into the ID lineup (or the eighth if you count VW’s ID R racecar), all of which are being built on the same modular electric vehicle platform. In addition to the standard Vizzion sedan, VW has debuted the first production car from this lineup (a Golf-style hatchback known as the the ID 3) and shown off concept versions of a large SUV (ID Roomzz), a crossover SUV (ID Crozz), a dune buggy (ID Buggy), and a revamped version of its iconic bus (ID Buzz), for which VW has also promised a delivery variant.

(The dedication to the letter z is truly something, but VW has also changed how it styles the “ID” portion of the nomenclature since the first vehicles were revealed. The lineup was originally referred to as “I.D.” before VW started referring to the Golf-style vehicle as “ID.3.” The company has also added an extra space to the name of the racecar and this new concept — “ID. R” and “ID. Space Vizzion,” respectively — while keeping the period. We’re... just going to go with “ID” from here on out.)

The ID Space Vizzion’s main attraction on the inside is a 15.6-inch touchscreen. A second smaller display sits behind the steering wheel, though VW says the most important driving information will be projected via augmented reality onto the windshield. Above all this is a panoramic glass roof. This is an increasingly common design choice in the premium segment, though VW has distinguished it by including a section that slides-and-tilts, which would give customers the best of both worlds between traditional sun roofs and the more modern single-pane glass roofs.

Similar to the Ford Mustang Mach-E revealed earlier this week, the ID Space Vizzion eschews traditional door handles in favor of a more futuristic approach. As the driver approaches the car, touchpads on the ID Space Vizzion’s doors will light up. Opening a door requires a tap on one those touchpads, which will also blink and vibrate to confirm the action. VW says this choice was made in part to help with aerodynamics, allowing the company to squeeze every bit of range out of the battery as possible. Same goes for the wheels VW slapped on the concept, which feature turbine-style “aero flaps” that keep air flowing smoothly past the car while it travels at speed.

As VW speeds towards electric vehicles and away from Dieselgate, the company is also starting to tout increasingly sustainable interiors as well. The ID Space Vizzion concept features seats, door trim, and arm rests all made out of “AppleSkin,” a material created from the “residual matter of apple juice production,” and uses chrome-like paint in place of actual chrome.

If all this isn’t enough to get you where you’re going, VW has packed the concept car with a last-mile solution: two electric longboards embedded in the trunk. We’ve seen automakers include skateboards and scooters in concepts past, but the specific inclusion of longboards feels like an obvious nod to the storage space and practicality that VW is going to try to promote with this vehicle when it goes into production next year.