U.S. economy picks up in third-quarter; data surprise on the upside 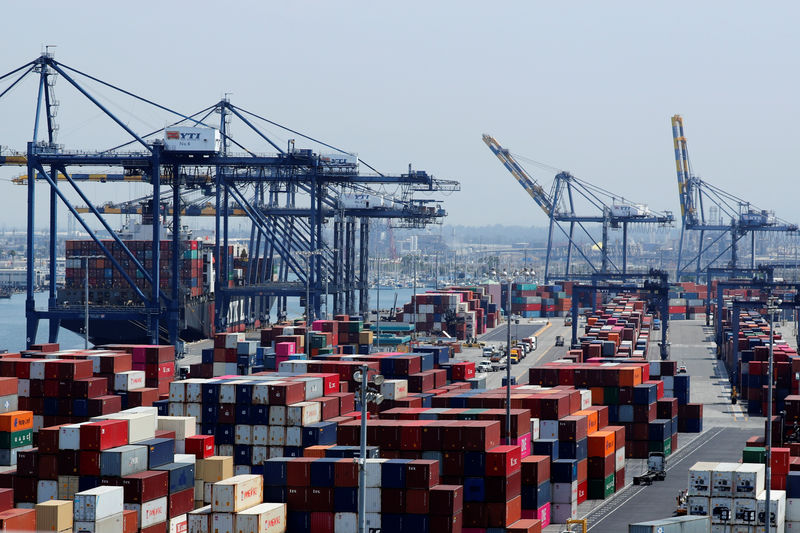 © Reuters. Ship and containers are shown at the port of Los Angeles in Los Angeles, California,

WASHINGTON (Reuters) - U.S. economic growth picked up slightly in the third quarter, rather than slowing as initially reported, and there are signs the downturn in business investment may be drawing to a close.

The modest firming in growth reported on Wednesday by the government came alongside data showing the number of Americans filing claims for unemployment benefits dropped last week after standing at a five-month high for two straight weeks. Labor market strength should continue to support consumer spending, which appears to be slowing.

Collectively those reports and others are painting a more upbeat picture of an American economy, now in a record 11th year of expansion, that has had to overcome speed bumps from President Donald Trump's trade war with China and the ebbing tailwinds from last year's Republican tax cuts. Economists boosted their estimates for growth in the current quarter as well.

The upswing in the data would appear to validate the optimistic tone struck earlier this week by Federal Reserve Chair Jerome Powell, who said "at this point in the long expansion, I see the glass as much more than half full."

The U.S. central bank last month cut interest rates for the third time this year and signaled a pause in the easing cycle that started in July when it reduced borrowing costs for the first time since 2008.

Gross domestic product increased at a 2.1% annualized rate, the Commerce Department said in its second estimate of third-quarter GDP. That was up from the 1.9% pace it estimated last month. The economy grew at a 2.0% pace in the April-June period.

Economists polled by Reuters had forecast third-quarter GDP growth would be unrevised at 1.9%.

The upward revision to GDP reflected more inventory accumulation than initially thought. Inventories rose at a $79.8 billion pace instead of the $69.0 billion rate reported last month. The inventory build, which economists attributed to the waxing and waning trade tensions between the United States and China, contributed to growth instead of being a drag.

Even discounting the inventory lift, the economy was healthy last quarter.

When measured from the income side, the economy grew at a 2.4% rate in the last quarter. Gross domestic income (GDI) increased at a rate of 0.9% in the second quarter. The income side of the growth ledger accelerated despite a drop in profits.

Second-quarter GDI growth was revised down by 0.9 percentage point, with growth in wages and sales during that period slashed by $46.7 billion to $62.1 billion.

After-tax profits without inventory valuation and capital consumption adjustment, which corresponds to S&P 500 profits, decreased $11.3 billion, or at a rate of 0.6%, as they were held down by legal settlements with Facebook (NASDAQ:FB) and Google (NASDAQ:GOOGL). Profits increased at a 3.3% rate in the second quarter.

The average of GDP and GDI, also referred to as gross domestic output and considered a better measure of economic activity, increased at a 2.3% rate in the July-September period, quickening from a 1.4% growth pace in the second quarter.

The Atlanta Fed raised its fourth-quarter GDP growth estimate to a 1.7% rate from only a 0.4% pace. Despite the upbeat growth data, inflation remains muted, which could trouble some Fed officials.

The Fed's preferred inflation measure, the core personal consumption expenditures (PCE) price index excluding food and energy, increased 1.6% in the 12 months through October. The so-called core PCE price index rose 1.7% in September and has undershot its 2% target this year.

The dollar firmed against a basket of currencies, while U.S. Treasury prices fell. Stocks on Wall Street stocks rose, with the main indexes touching record highs.

Though growth has been relatively strong, economists did not expect the economy to achieve the Trump administration's 3.0% this year. The economy grew 2.6% in the first half.

"There isn't a lot of oomph here to power the economy forward at anywhere near the Trump economics team's prediction of 3 percent," said Chris Rupkey, chief economist MUFG in New York. "There are some green shoots, however, that bode well for the economy in the months ahead."

The White House's 16-month trade war with China and the fading stimulus from last year's $1.5 trillion tax cut package are restraining the economy. But there was good news for business investment, which has borne the brunt of the trade war.

In a second report on Wednesday, from the Commerce Department said orders for non-defense capital goods excluding aircraft, a closely watched proxy for business spending plans, surged 1.2% last month, the largest gain since January, after falling 0.5% in September.

Business investment dropped at a 2.7% rate in the third quarter, rather than contracting at a 3.0% pace as previously reported. This was because the decline in spending on nonresidential structures such as mining exploration, shafts and wells, was not as steep as previously estimated.

A third report from the Labor Department showed initial claims for state unemployment benefits declined 15,000 to a seasonally adjusted 213,000 for the week ended Nov. 23, raising concerns of some easing in the labor market.

In a fourth report, the Commerce Department said consumer spending, which accounts for more than two-thirds of U.S. economic activity, increased 0.3% last month as households spent more on electricity and gas, offsetting a drop in new motor vehicle purchases. Spending gained 0.2% in September.

"We are in store for a moderation in the pace of consumer spending, not a collapse," said Tim Quinlan, an economist at Wells Fargo (NYSE:WFC) Securities in Charlotte, North Carolina.