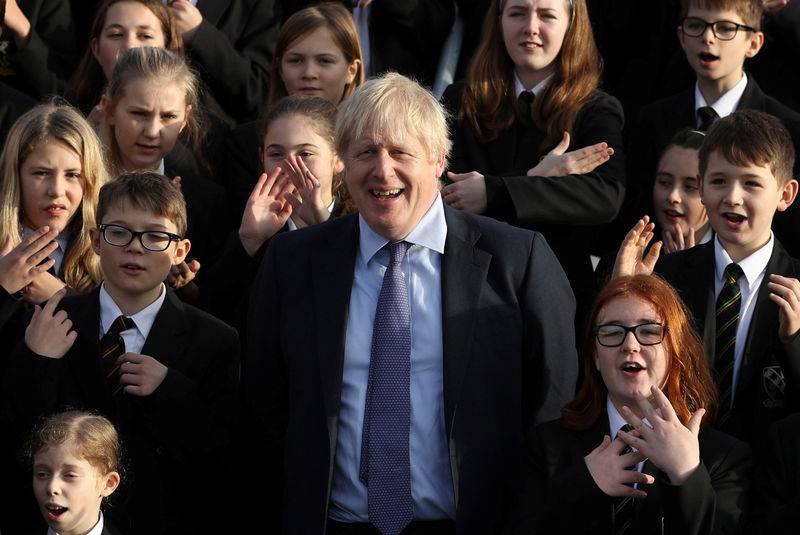 LONDON (Reuters) - The chances of a Conservative Party majority after next month's UK election hit their highest of the campaign on Thursday and lifted sterling in tandem after a closely watched polling model indicated the party could win its biggest majority since 1987.

Such a majority, estimated at 68 seats under the model developed by pollsters YouGov, would give Prime Minister Boris Johnson a mandate to take Britain out of the European Union on Jan. 31 with a divorce deal already negotiated with Brussels.

As the following graphic shows, odds on a Conservative majority on Betfair Exchange hit 70% on Thursday, their highest this year. Sterling rose to $1.2953, its highest since November 21, after the poll was released.

GRAPHIC: Sterling vs. odds of Conservative majority in 2019 election - https://fingfx.thomsonreuters.com/gfx/mkt/12/9264/9176/betfair-sterling2.png

Although the prospect of a Conservative win has been seen as positive for the pound, the case for more gains is not clear-cut, according to the currency derivative markets.

That's partly because Brexit in January does not remove all the uncertainty pressuring the UK economy as it merely fires the starting gun for potentially protracted negotiations on a future free trade deal between Britain and the EU.

Demand for 'put' options to sell the pound in the future now outstrips demand for 'call' options to buy sterling, and this is reflected in the put premium contained in one-month "risk reversals" that straddle the election date.