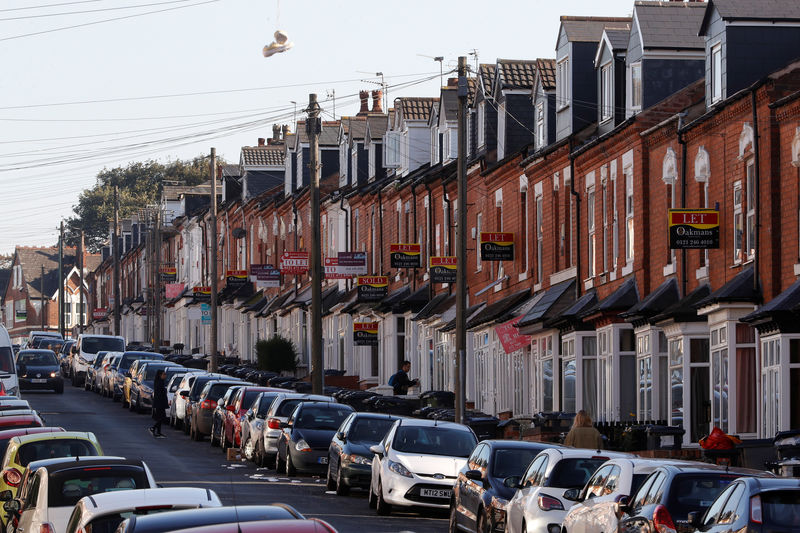 LONDON (Reuters) - Annual home price rises in Britain won't keep pace with already-low inflation until 2021, a Reuters poll found, and will fall in the capital London this year as uncertainty around the country's departure from the European Union continues to deter buyers.

Britons voted in a June 2016 referendum to leave the EU but there is still no clarity about how, when or even if the two sides will finally part ways.

That uncertainty is likely to continue even if Britain leaves by Jan. 31 as is currently scheduled as there is another tight deadline - by the end of 2020 - for both parties to hammer out a new trade deal, though many doubt that target can be met.

Prices in London, for decades a magnet for foreign investors and speculators, will fall 1.5% this year and only hold steady in 2020, the Nov. 5-18 Reuters poll found.

"Until we have greater certainty regarding the political environment it isn't possible to forecast what might happen in London with the greatest accuracy," said Rod Lockhart at property finance hub LendInvest.

"We do not anticipate a material price rebound in London until at least 2022, although we may experience some recovery from 2021 - if and when the political 'dust' begins to settle."

For a graphic on the UK housing market outlook, click https://fingfx.thomsonreuters.com/gfx/polling/1/640/636/UK%20house%20prices%20outlook.png

"Regardless of what happens with Brexit in the months ahead, a revival in the housing market is unlikely," said Hansen Lu at Capital Economics.

"Indeed, even if a Brexit deal is implemented soon, we expect to see only a small improvement in housing market transactions and house price growth over the next two years."

Based on recent public opinion polls, British Prime Minister Boris Johnson looks set to win a Dec. 12 election and secure the backing in parliament he needs to get his new Withdrawal Agreement passed and take Britain out of the EU on Jan. 31.

Johnson's Conservative Party has extended its lead over the opposition Labour Party during the past week, an opinion poll by ICM for Reuters showed on Monday.

Economists in another Reuters poll last week overwhelmingly said Britain would eventually strike a free-trade deal with the EU. The second-most likely resolution was Britain remaining a member of the European Economic Area.

But third most likely in the poll of economists was the country leaving the EU without a deal and trading under World Trade Organization rules - something the housing market experts polled by Reuters said unanimously would have the most deflationary impact on home prices.

Economists said the least likely outcome was Brexit being canceled. Housing watchers - again, unanimously - said that outcome would be the most inflationary for house prices in the coming year.

Rising prices would not be welcomed by first-time buyers struggling to get on the property ladder since, despite very low borrowing costs, scraping together the minimum 10% deposit demanded by most lenders poses a huge challenge.

The average asking price nationally for a home was 302,808 pounds ($391,652) this month, property website Rightmove said, around ten times the average British salary. The average price was double that in London.

When asked to describe the level of London house prices on a scale of 1 to 10 from extremely cheap to extremely expensive, the median response was 8. Nationally they were rated 6.

"While house prices in London and the surrounding regions have been falling over recent months, prices are still significantly higher than elsewhere in the country, making buying a property in the capital unaffordable for many people," said Jamie Durham at PwC.

"But this affordability problem is not constrained to just the capital, and house prices are high relative to wages right across the country."