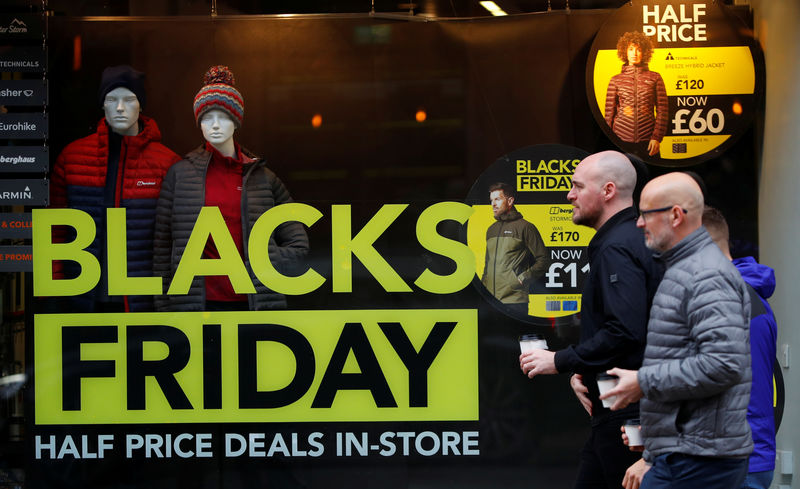 LONDON (Reuters) - The volume of Black Friday payment transactions in Britain as of 1000 GMT was up 12.5% versus last year, initial data from Barclaycard showed on Friday, bringing some cheer to UK retailers in need of a tonic after a troubled year.

Barclaycard, which processes nearly one pound ($1.28) in every three pounds spent in the United Kingdom, said its data showed transactions had also been strong throughout the week of Black Friday.

"With many retailers spreading their deals out throughout the week, they will be encouraged to see this hasn’t cannibalized sales volumes on Black Friday itself," it said.

The firm did not give a figure for the year-on-year movement of the value of sales. Last year transactions increased 10% versus 2017.

With recent UK consumer spending subdued, Brexit still unresolved and a Dec. 12 national election creating new uncertainties, retailers have been hoping for a boost from Black Friday discount events that were first brought over from the United States by Amazon (O:AMZN) in 2010.

Analysts have suggested Black Friday sales could be helped this year by its fall on the last Friday of the month, which coincides with payday for many.

Dixons Carphone's (L:DC) Carphone Warehouse business said it had seen three orders per second on its website since its Black Friday sales went live at 2100 GMT on Thursday. It said the Apple (NASDAQ:AAPL) iPhone 11, Apple iPhone XR, and Samsung (KS:005930) Galaxy S10 were the most popular products so far.

Department store group John Lewis said the busiest shopping hour online between midnight Thursday and midday Friday was between 0900 GMT and 1000 GMT. The most popular searched for products were Lego, iPads and Airpods.

With harsh lessons learned from past Black Fridays, British retailers are stretching promotions over several weeks, aiming to smooth out consumer demand and reduce the pressure on supply and distribution networks.

U.S. consumers splurged more than $2 billion online in the first hours of Thanksgiving shopping on Thursday, while crowds were limited at retailers on the eve of Black Friday, reflecting the broader trend away from shopping at brick-and-mortar stores.