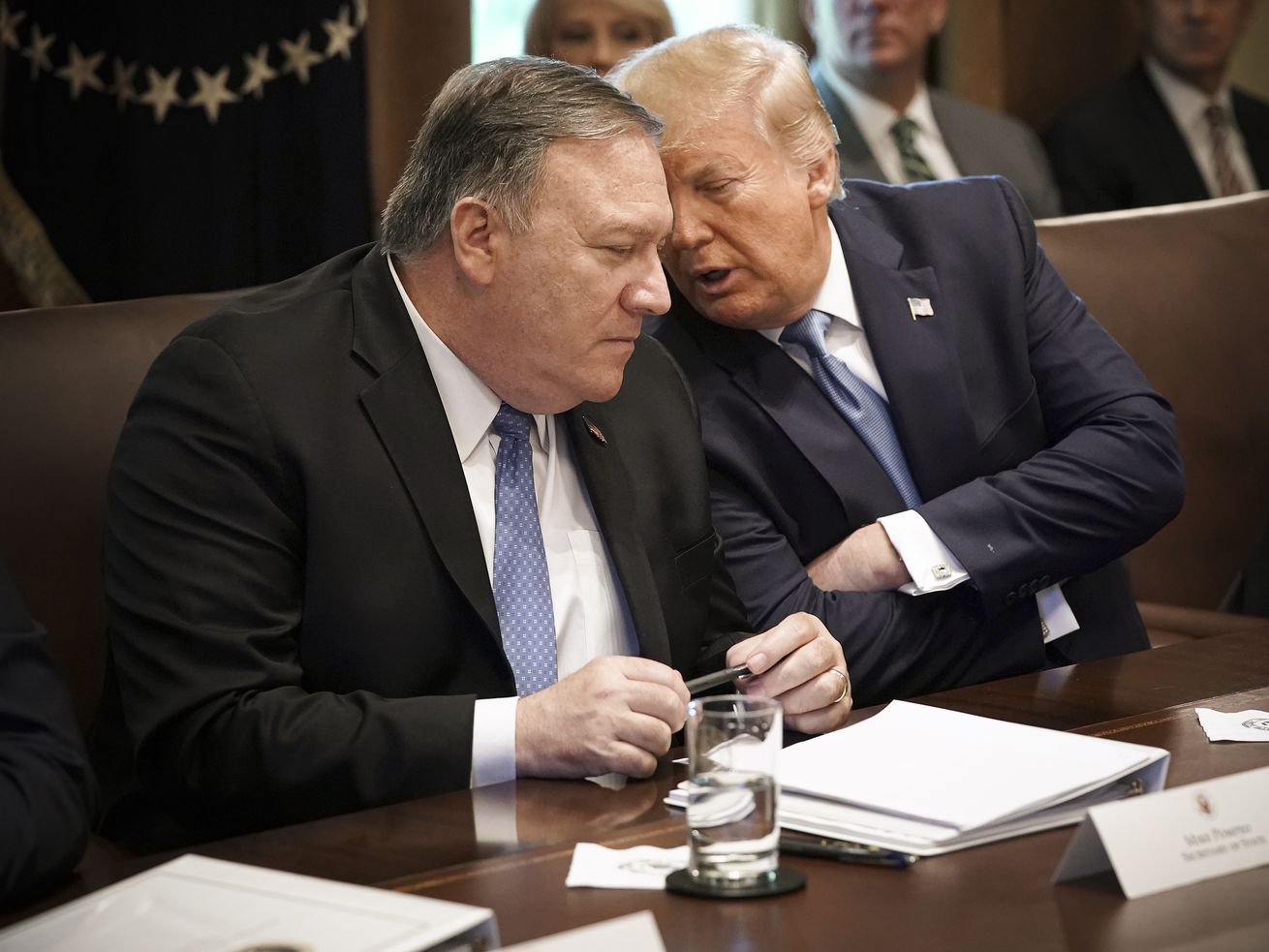 President Trump talks with Secretary of State Mike Pompeo during a Cabinet meeting at the White House, on July 16, 2019. | Chip Somodevilla/Getty Images

Ambassador Gordon Sondland testified that “everybody was in the loop.”

“Everyone was in the loop,” US Ambassador to the European Union Gordon Sondland said to the House Intelligence Committee more than once on Wednesday in damning impeachment testimony.

Sondland, in so few words, implicated those at the highest level of the Trump administration — including Secretary of State Mike Pompeo and the president himself — in pressuring Ukraine to announce investigations into the 2016 elections and energy company Burisma, which former Vice President Joe Biden’s son, Hunter, served on the board of.

“Precisely because we did not think that we were engaging in improper behavior, we made every effort to ensure that the relevant decision-makers at the National Security Council and State Department knew the important details of our efforts,” Sondland testified on Wednesday.

He added: “The suggestion that we were engaged in some irregular or rogue diplomacy is absolutely false.”

Even though Trump’s personal lawyer Rudy Giuliani was also involved with Ukrainian policy, Sondland testified that far from pursuing a rogue operation, Sondland and others understood that if they “refused to work with Mr. Giuliani, we would lose a very important opportunity to cement relations between the United States and Ukraine.”

“So we followed the president’s orders,” Sondland said.

The extent to which Sondland’s testimony tied Trump himself to the scheme varied depending on which of the two quid pro quos was under discussion. But the bottom line was clear: US officials marshaled the power of the United States government to pursue the political whims of President Donald Trump.

A key question in House Democrats’ impeachment inquiry is whetherTrump’s desire to have a public announcement of investigations (not necessarily actual investigations) — an announcementthat would benefit him politically — effectively also became official United States policy.

And listening to Sondland’s testimony, it was. He said that he knew a White House meeting for the new Ukrainian presidentwas conditioned on an announcement of those investigations, and he “later came to believe” that military aid was contingent on those announcements, too. In other words, he knew of a quid pro quo for a White House meeting, and he eventually understood that one existed for Ukrainian support, too.

Sondland knows the investigations mattered to the president because hespoke with him directly, including a call on July 26 that another State Department official overhead, in which Trump allegedly asked Sondland about whether Zelensky would pursue the investigations he wanted. (Sondland, for his part, didn’t deny the call took place but said Wednesday that he didn’t recall mentioning the Bidens and that he and Trump mostly talked about A$AP Rocky.)

Sondland did testify Wednesday that the president never told him directly that aid to Ukraine was being denied until Zelensky committed to the investigations. Instead, he said it’s something that he inferred over time — not least because he understood that Giuliani spoke for the president.

In an exchange with Democratic counsel Daniel Goldman, Sondland lays this out pretty explicitly:

Goldman: And you said President Trump had directed you to talk, you and the others to talk to Rudy Giuliani at the Oval Office on May 23, is that right?

Sondland: If we wanted to get anything done with Ukraine, it was apparent to us we needed to talk to Rudy.

Sondland suggests that he and others acted on this understanding. Whatever their personal objections to this arrangement, officials like Sondland or former Ukraine envoy Kurt Volker (who testified Tuesday that he tried to “thread the needle” on Ukraine), didn’t stop pushing get Ukraine to commit to those investigations. Sondland has said he told the Ukrainians directly that he believed aid and the meeting were preconditioned on Ukraine following through on those inquiries.

“We were working to overcome the problems, given the facts as they existed,” Sondland said.

The facts, as they existed, were that Trump wanted those public inquiries. Sondland’s testimony indicates that the line between Trump’s interests and US interests in Ukraine became blurred, and then accepted. It wasn’t a secret. Everyone, as Sondland repeated, was in the loop.

“The leadership at the State Department, the National Security Council, and the White House were all informed about the Ukraine efforts from May 23, 2019, until the security aid was released on September 11, 2019,” Sondland said in his opening testimony.

These dates are important. Ukrainian President Volodymyr Zelensky was inaugurated on May 20, and Sondland attended, along with Volker and Secretary of Energy Rick Perry. On May 23, that delegation returned to brief Trump about their meeting with the new president. Trump instructed those present to “talk to Rudy” instead.

September 11 is the date US military aid to Ukraine was finally released, just two days after Congress was informed about a whistleblower complaint.

A lot happened in this time period: multiple meetings with Ukrainian officials where the need for investigations were discussed, Trump’s July 25 call with Zelensky. But Sondland is saying, throughout it all, the top officials in the US government knew what was going on, and that has to include efforts to pressure Ukraine to announce investigations into Burisma (which meant the Bidens, as Sondland said he learned later) and the 2016 election.

And he brought receipts: Sondland on Wednesday presented one email, sent on July 19, to Secretary of State Mike Pompeo, White House acting Chief of Staff Mick Mulvaney, and other top officials in the Trump administration that basically informs them all that he’s encouraging Zelensky to pursue those investigations that Trump wants:

I Talked to Zelensky just now… He is prepared to receive POTUS’ call. Will assure him that he intends to run a fully transparent investigation and will ‘turn over every stone’. He would greatly appreciate a call prior to Sunday so that he can put out some media about a ‘friendly and productive call’ (no details) prior to Ukraine election on Sunday.

Mulvaney responded that he “asked the NSC to set it up for tomorrow,” according to Sondland’s testimony.

“Everyone was in the loop,” Sondland said. “It was no secret. Everyone was informed via email on July 19, days before the presidential call.”

Much has been made throughout this impeachment investigation into how officials interacted with Ukraine. There were the official, formal diplomatic channels and then what looked like an “irregular” channel, led by Trump’s personal lawyer, Rudy Giuliani.

Those two channels overlapped, which became clear in text messages Volker provided to the House Intelligence Committee that showed top US diplomats interacting with Giuliani. And Trump, on his July 25 call with Zelensky, told the Ukrainian president: “Rudy very much knows what’s happening and he is a very capable guy. If you could speak to him that would be great.”

But Sondland’s testimony indicated that this wasn’t just overlap; the irregular channel subsumed the official one.

“I don’t know how someone could characterize something as an irregular channel when you’re talking to the president of the United States, the secretary of state, the national security adviser, the chief of staff of the White House, the secretary of energy,” Sondland testified Wednesday.

Sondland said everyone was in the loop, and it shows exactly why House Democrats want to hear from these top-level officials (and why they might consider it obstruction if the officials do not give testimony.) But beyond this Ukraine scheme, the seeming involvement of so many top levels officials raises troubling questions about how — and for whom — US policy is being conducted.