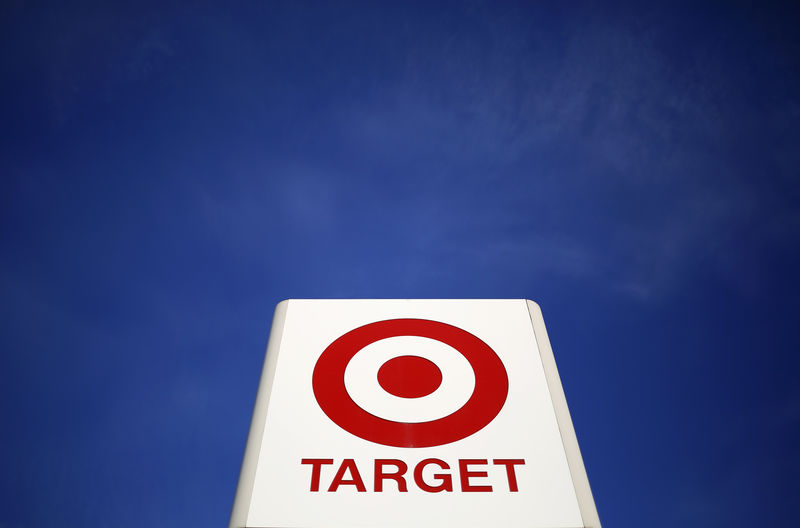 © Reuters. Sign for a Target store is seen in the Chicago suburb of Evanston, Illinois

By Nivedita Balu and Aishwarya Venugopal

(Reuters) - Target Corp (N:TGT) raised its full-year earnings forecast on Wednesday, signaling a strong holiday season as the retailer benefits from its investments in same-day delivery services and store revamps, sending its shares up 9%.

The big-box retailer's better-than-expected quarterly results and forecast also helped allay fears about the health of the U.S. consumer that were spurred by outlook cuts by a handful of retailers on Tuesday.

The company has posted strong sales growth in the past few years, winning over customers by speeding up delivery through same-day services such as drive-up, click-and-collect and Shipt.

Target's investments in its same-day delivery services accounted for 80% of its digital comparable sales growth, which surged 31% in the third quarter. Its store traffic was up 3.1%.

"Target is taking share in the discretionary side of its assortment, feasting on the department store and specialty channel, while also having superior consumables prices to Amazon (NASDAQ:AMZN)," J.P. Morgan analyst Christopher Horvers said.

Overall same-store sales rose 4.5%, beating expectations of a 3.6% increase. For the holiday quarter, Target expects comparable sales growth of 3% to 4%, in line with expectations.

Target and other major retailers have been offering deals earlier than usual and sharpening focus on faster delivery in preparation for the crucial holiday shopping season, which has six fewer days this year.

Excluding certain items, Target earned $1.36 cents per share in the quarter ended Nov. 2, beating expectations of $1.19, according to IBES data from Refinitiv.

"Target continues to operate in rarified air, with Q3 results outstanding across the board," Moody's retail analyst Charlie O'Shea said.

Target shares, which have gained nearly 70% this year, were trading at $120.40 on track to open at a record high.