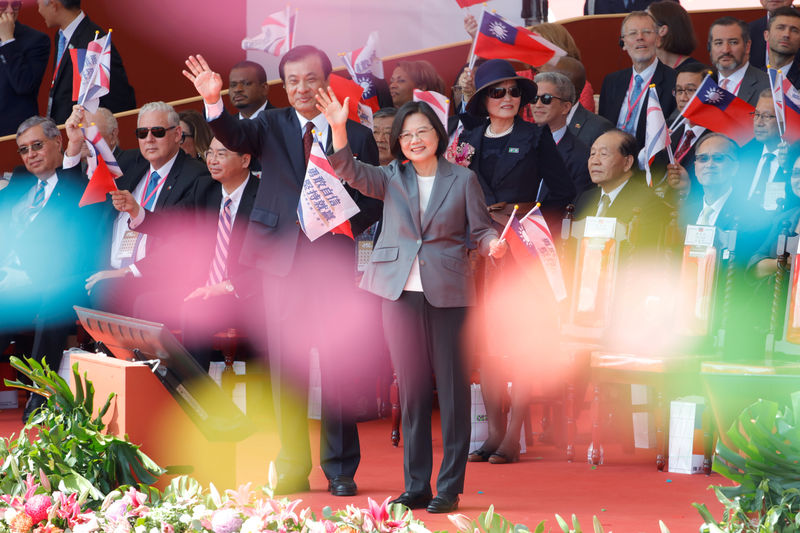 TAIPEI (Reuters) - Taiwan's central bank has instructed two major foreign exchange banks on the island to bring in more U.S. dollars before the end of the year to prepare for increased demand in case of political uncertainty in January elections, two sources told Reuters.

China claims Taiwan as its sacred territory to be brought under Beijing's control by force if necessary, and pays close attention to elections on the island.

Beijing has in the past menaced Taiwan with war games to try and influence people not to vote for candidates viewed as pro-Taiwan independence, though such efforts have tended to backfire.

Two sources with direct knowledge of the situation told Reuters that Taiwan's central bank has instructed Mega Commercial Bank and Bank of Taiwan to import physical dollar bills - $30 million for Mega and $25 million for Bank of Taiwan.

A Taiwan central bank official said it was normal to ask banks to ensure they had ample U.S. dollars ahead of elections.

The sources added that the import volume was less than the last presidential election in 2016, as the central bank assessed that the banks' dollar cash reserves were still abundant.

Taiwan usually stocks sufficient dollars ahead of elections to ensure it can meet demand if there is tension or political uncertainty with China, in case Taiwanese have to leave the island fast or the currency plunges in the event of a crisis.

Ahead of the 1996 elections, when China fired missiles into the Taiwan Strait, some Taiwanese rushed to buy gold.

China sailed an aircraft carrier group through the Taiwan Strait earlier this month, a move Taiwan denounced as attempted intimidation. China has made little secret of its dislike of Tsai.

Taiwan has a large current account surplus and substantial foreign exchange reserves, which stood at $472.48 billion at the end of October, the sixth largest in the world.