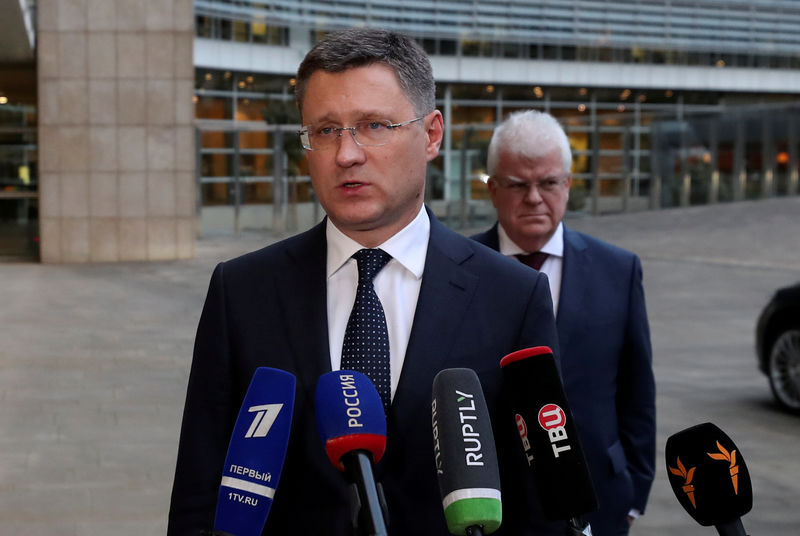 MOSCOW (Reuters) - Russian oil companies proposed on Thursday not to change their output quotas as part of a global deal until the end of March, when the current agreement expires, putting pressure on OPEC+ to avoid any major shift in policy when the group meets next week.

They also offered to exclude production of gas condensate, a light oil, from the output quotas as Russia has been struggling to meet its supply-reduction targets in recent months.

The proposals to preserve the deal between the Organization of the Petroleum Exporting Countries and non-OPEC nations until the end of March were made at a gathering with Energy Minister Alexander Novak, who will attend next week's meetings in Vienna.

OPEC and its allies have so far been expecting to extend output cuts until mid-2020, with non-OPEC producer Russia supporting Saudi Arabia's push for stable oil prices amid the listing of state oil giant Saudi Aramco.

On Thursday, Russian oil firms suggested to Novak that they meet again at the end of March to discuss the oil deal, Ravil Maganov, a first vice president of Russian oil major Lukoil (MM:LKOH), told reporters after the meeting.

"We remain in the deal with the same quotas. We will meet at the end of the first quarter to discuss. Those are (our) proposals," Maganov said.

"We will stay in the deal until the end of March," Yevgeny Tolochyok, head of Russneft (MM:RNFT), said.

Russia's position on the deal is "currently a secret", Novak said.

One sticking point, however, is production of gas condensate, a high-premium light crude oil. In Russia, unlike Saudi Arabia and other OPEC producers, condensate is included in its oil production data.

Last week, Novak suggested it was time to remove gas condensate from the country's overall oil statistics. On Thursday, he said no such decision had been taken yet.

Former Russian natural resources minister Sergei Donskoi, now a board member at Irkutsk Oil Co, said after Thursday's meeting that his company supported the idea, which may be enforced after the first quarter.

"We've got a lot of condensate," he said.