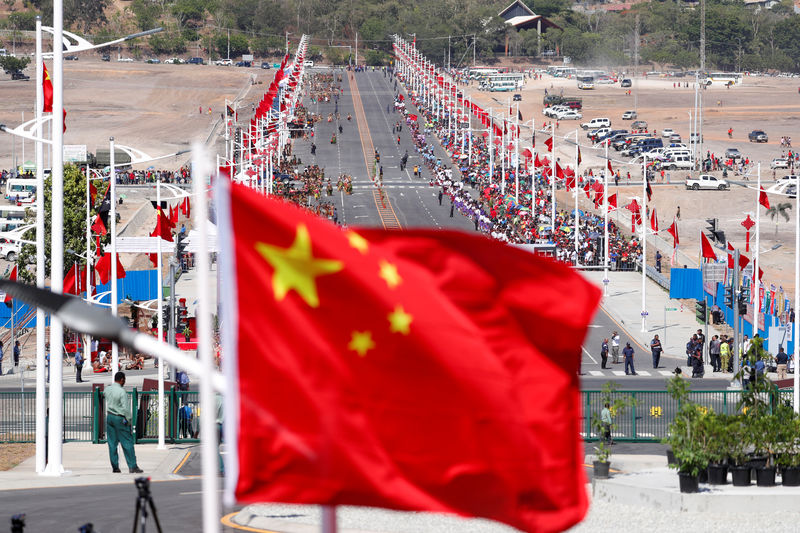 © Reuters. FILE PHOTO: A Chinese national flag flies in front of a Chinese-built main road, before a welcome ceremony for China's President Xi Jinping ahead of the APEC Summit in Port Moresby

By Jonathan Barrett and Charlotte Greenfield

SYDNEY/WELLINGTON (Reuters) - Papua New Guinea's annual debt repayments to China are forecast to increase 25% by 2023, new budget figures show, at the same time as the Pacific nation falls to its largest ever deficit.

The resource-rich archipelago, which is at the center of a diplomatic tussle between China and the United States, has blamed extravagant spending by the previous administration for its souring finances, which will require the government to borrow even more to pay the bills.

Balancing its books has been made more difficult by recalculations to the country's outstanding debt. It has soared 10 percentage points since the last annual budget to 42% of gross domestic product (GDP), above the legal limit of 35%.

"You have some of those loans clicking in; the repayments are going to be a problem," said Paul Barker, executive director of Port Moresby-based think tank the Institute of National Affairs.

Formerly administered by U.S. ally Australia, PNG has in recent years turned increasingly to China for financing as Beijing becomes a bigger player in the region.

The U.S. has repeatedly warned that China was using "predatory economics" to destabilize the Indo-Pacific; a charge strongly denied by Beijing.

Although the total debt owed to Beijing was not disclosed in PNG's budget documents released on Thursday, repayment schedules show China is by far the biggest bilateral creditor, with annual repayments to the Asian giant projected to increase 25% to about $67 million by 2023.

Treasurer Ian Ling-Stuckey said that past excesses, including extravagant spending linked to hosting the Asia-Pacific Economic Cooperation forum last year, were emblematic of the financial problems that had been building up.

"At that time, we were in the midst of the APEC extravaganza with our new APEC Haus, red carpet, fancy new roads all focused in Port Moresby, and Maseratis," he said in a speech delivered to parliament on Thursday.

"Now, we have a new prime minister that travels economy class."

The purchase of a luxury fleet of cars during the forum, that included 40 slick Maserati Quattroporte sedans, sparked public protests at the time, given the country is beset by poverty.

Prime Minister James Marape took over as leader in late May after Peter O'Neill lost the support of the parliament following almost eight years in power.

Adding to the fiscal strain, income from the country's natural gas sector has also repeatedly come in below forecasts.

PNG's total expenditure in the 2020 budget is forecast to reach a record 18.7 billion kina ($5.36 billion), against an anticipated 14.1 billion kina ($4.04 billion) in revenue, creating the largest deficit it has ever faced, according to budget documents.