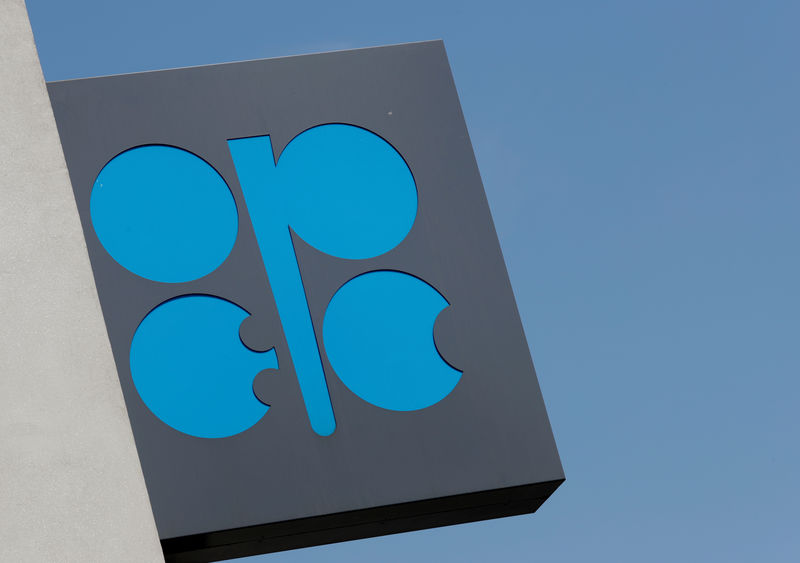 LONDON (Reuters) - OPEC oil output has fallen in November as Angolan production has slipped due to maintenance and Saudi Arabia has kept a lid on supply to support the market before the initial public offering (IPO) of state-owned Saudi Aramco, a Reuters survey found.

On average, the 14-member Organization of the Petroleum Exporting Countries has pumped 29.57 million barrels per day (bpd) this month, according to the survey. That is down 110,000 bpd from October's revised figure.

The survey suggests Saudi Arabia, after resuming normal supply after attacks on facilities in September, is still pumping far less than an OPEC-led supply deal allows. OPEC meets to review the pact on Dec. 5, the same day Aramco is due to announce the final offer price.

OPEC, Russia and other allies, known as OPEC+, agreed to reduce supply by 1.2 million bpd from Jan. 1. OPEC's share of the cut is about 800,000 bpd, to be delivered by 11 members, with exemptions for Iran, Libya and Venezuela.

The producers are expected to extend their supply pact at meetings on Dec. 5-6. OPEC delegates have said the producers could discuss deeper supply cuts amid forecasts of excess supply in 2020.

"The minimum is to extend," said an OPEC delegate.

Oil (LCOc1) has slipped to $63 a barrel after spiking to $72 following the Sept. 14 attacks on Saudi oil plants. The current price is below the levels many OPEC countries need to balance their budgets and below the levels officials say they favor.

The 11 OPEC members bound by the agreement, which for now runs until March 2020, have easily exceeded the pledged cuts. Compliance has risen to 152% in November, the survey found, from 135% in October, although Iraq and Nigeria remain laggards among larger producers.

OPEC's largest production drop of 140,000 bpd was in Angola, which exported less crude in November due to maintenance affecting the Girassol crude stream, traders said.

The African producer was already pumping far below its OPEC quota due to a natural decline in production and a lack of new fields coming online, rather than due to voluntary restraint.

Riyadh's output had jumped by 850,000 bpd in October after the September attacks, but remained below Saudi Arabia's OPEC quota. In November, the country has been pumping more than 400,000 bpd less than the agreement allows, the survey found.

Nigeria, which has consistently pumped more than its OPEC target, continued to do so in November, the survey found, although output has edged lower this month.

Among countries pumping more, the largest increase was in Kuwait, which increased output by 70,000 bpd to 2.72 million bpd, reaching its exact quota level.

Ecuador also pumped more after a decline in October, when protests against government austerity measures led to several fields being shut down.

Venezuela, which is contending with U.S. sanctions imposed on state oil firm PDVSA and a long-term decline in output, managed a small boost to supply with exports increasing in November.

Production from the two other exempt producers, Libya and Iran, was little changed.

The Reuters survey aims to track supply to the market and is based on shipping data provided by external sources, Refinitiv Eikon flows data and information provided by sources at oil companies, OPEC and consultants.