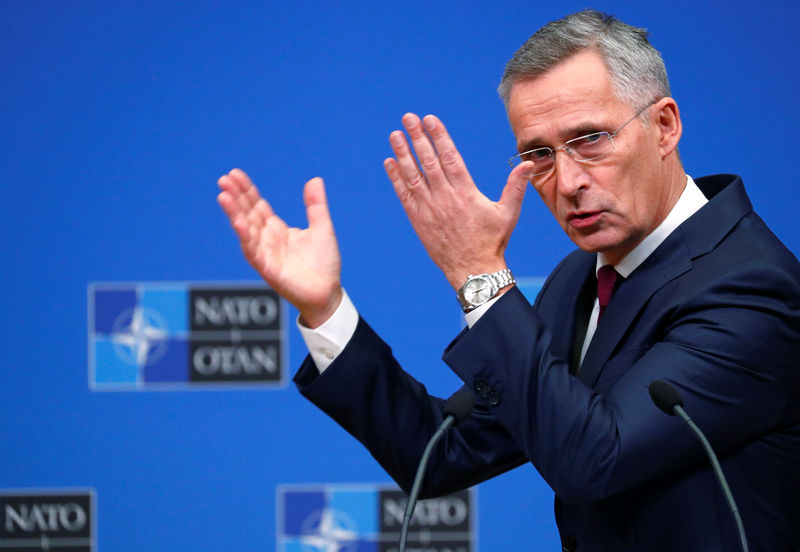 BRUSSELS (Reuters) - More European allies in NATO are set to meet a defense spending target sought by the United States in 2019, with sharp rises in Romania and Bulgaria, NATO Secretary-General Jens Stoltenberg said on Friday, but Belgium and Spain will continue to lag.

NATO allies agreed a target to spend 2% of economic output by 2024 after Russia annexed Crimea in 2014. U.S. President Donald Trump has increased pressure on them, accusing Europe of taking U.S. protection for granted and warning of consequences.

Nine NATO countries will now meet or exceed the NATO target of spending 2% of national output on defense by the end of this year - the United States, Bulgaria, Britain, Greece, Romania, Poland, Latvia, Lithuania and Estonia.

Turkey and France are expected to be just below the goal, with only Belgium, Spain and Luxembourg still spending less than 1% of economic output on defense.

That compares to seven NATO countries on target in 2018.

The increases also mean that between 2016 and the end of 2024, Europe, Turkey, and Canada, are expected to increase defense spending by a cumulative $400 billion.

"The accumulated increase in defense spending by the end of 2024 will be 400 billion U.S. dollars. This is unprecedented progress," Stoltenberg told a news conference before the NATO summit in London next Tuesday and Wednesday.

At a NATO summit in Wales in 2014, allies agreed to end years of defense cuts that left Europeans without vital capabilities, such as refueling airborne fighter bombers, although the 2% percent goal is not legally binding.