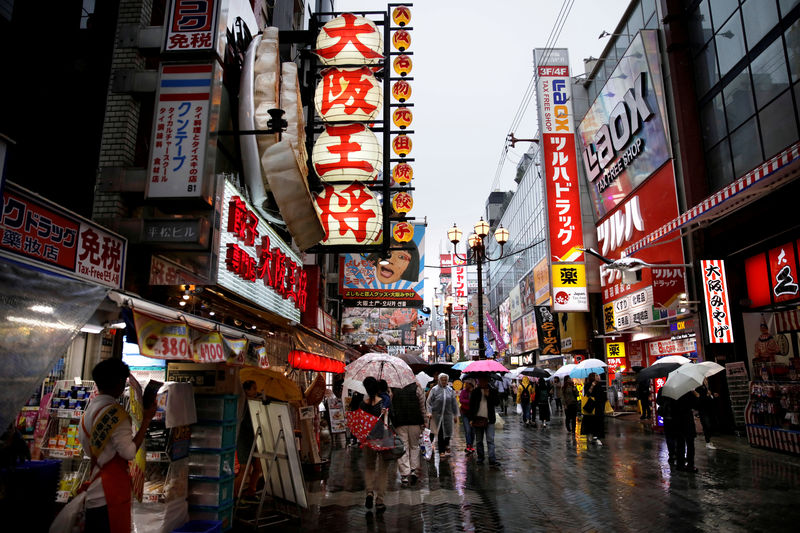 TOKYO (Reuters) - Japan's retail sales tumbled at their fastest pace in more than 4-1/2 years in October as a sales tax hike prompted consumers to cut spending, raising a red flag over the strength of domestic demand.

The Japanese government increased the nationwide sales tax to 10% from 8% on Oct. 1, in a bid to fix the industrial world's heaviest public debt burden, which is more twice the size the country's gross domestic product.

However, some analysts have warned the tax hike, previously postponed twice, could leave the economy without a growth driver amid a slump in exports and production.

Retail sales fell 7.1% in October from a year earlier, pulled down by weak demand for big ticket items such as cars and household appliances as well as clothing, trade ministry data showed on Thursday. The data showed department store sales were hit particularly hard.

The drop marked the biggest since a 9.7% fall in March 2015 and was worse than a 4.4% decline predicted by economists in a Reuters poll.

It was also sharper than the declines reported after the last two times the sales tax was raised, suggesting other factors might be dragging on consumption.

The negative reading comes after separate data this month showed Japan's economy nearly stalled in the third quarter, while exports in October shrank at their fastest pace in three years.

The gloomy conditions have led to calls for the government to compile a big spending package to keep the country's fragile economic recovery on track.

(For an interactive graphic on Japan's retail sales, click: https://fingfx.thomsonreuters.com/gfx/editorcharts/JAPAN-ECONOMY-RETAIL/0H001QXM89NP/index.html)

Some analysts have said retail sales in October have been particularly weak due to poor weather, after a huge typhoon tore through central and eastern Japan, exacerbating the negative effect from the sales tax hike.

The previous tax hike to 8% from 5% in 2014 hit the broader economy hard as households tightened their purse strings after front-loading purchases before the hike.

But policymakers have said that the tax hike last month has not triggered such a big swing in demand, given the smaller extent of the hike and various government measures to help offset the hit to spending.