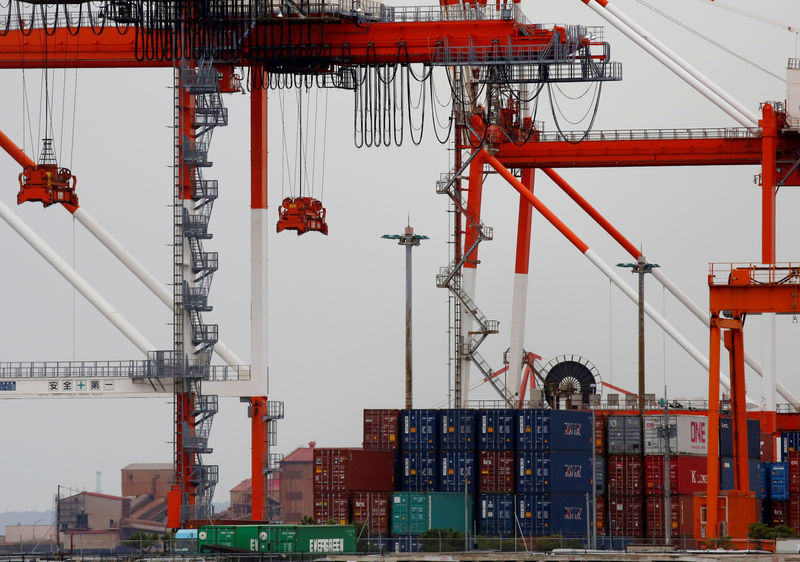 TOKYO (Reuters) - Japan's exports tumbled at their quickest pace in three years in October, threatening to tip the trade-reliant economy into recession as weakening demand from United States and China darkened the outlook.

Ministry of Finance data out on Wednesday showed Japan's exports fell 9.2% year-on-year in October, a bigger decline than the 7.6% drop expected by economists in a Reuters poll.

The feeble results, driven by plummeting shipments of cars and aircraft engines to the United States and plastic materials to China, marked the longest run of declines in exports since a 14-month stretch from October 2015 to November 2016.

In volume terms, exports slumped 4.4% in the year to October, the third consecutive month of declines.

The data comes after a preliminary reading of gross domestic product last week showed Japan's economy saw the worst growth in a year in the third quarter due to soft demand.

Lawmakers have called on the government to boost spending by as much as 10 trillion yen ($92.08 billion) for the current fiscal year to support the economy, which many fear is facing additional pressure from a sales tax hike that took effect in October.

The government has said it plans to compile a stimulus package as soon as possible as a pre-emptive measure against heightening overseas risks.

By region, exports to China, Japan's biggest trading partner, slipped 10.3% year-on-year in October, down for the eighth month as shipments of plastics and car parts declined.

Exports to Asia, which account for more than half of Japan's overall exports, tumbled 11.2% in the year to October, down for the 12th month.

Japan's exports to the United States dropped 11.4% in the year to October, hurt by reduced shipments of 2,000 to 3,000 cc cars, aircraft engines and car parts.

The nation's overall imports sank 14.8% year-on-year, a smaller decline than the median estimate for a 16.0% decrease.

The trade balance came to a surplus of 17.3 billion yen, versus a 301.0 billion yen surplus seen by economists.