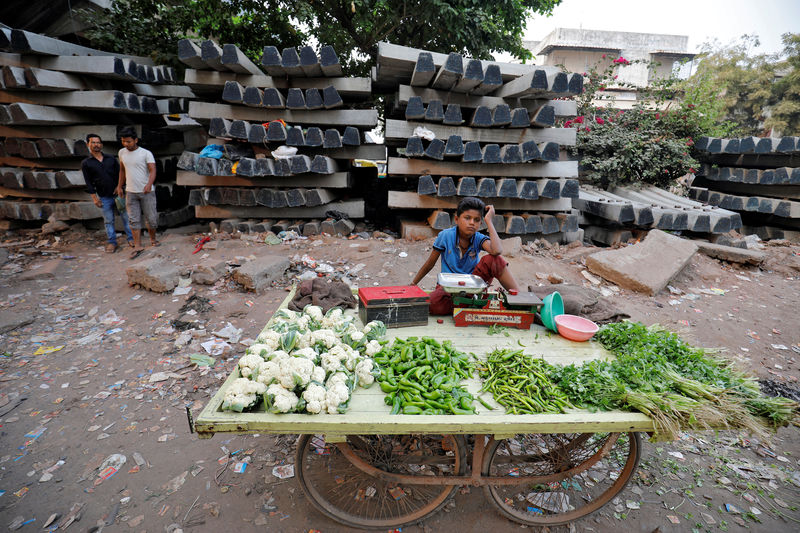 NEW DELHI (Reuters) - India's annual economic growth slowed to 4.5% in the July-September quarter, its weakest pace since 2013, putting pressure on Prime Minister Narendra Modi to speed up reforms as five rate cuts by the central bank have failed to boost investments.

Economists said the drop in growth could prompt the Reserve Bank of India to cut its repo rate by 25 basis points to 4.90% at its meeting next week, although investors are skeptical about how effective monetary policy can be in boosting growth in the current scenario.

The year-on-year growth figure was below the 4.7% forecast in a Reuters poll of economists and compared with 7% growth in the same quarter of 2018, and 5% in the previous quarter.

Modi's government, given a second term by voters in May, has taken several steps including cutting corporate tax in September and speeding up privatization of state-run firms to boost investments and bolster growth.

India needs to grow at around 8% a year to create enough jobs for the millions of young people joining the labor force each year, yet many economists see the current slowdown continuing for another year or two, underlining the case for urgent reforms.

"At this point in time, direct fiscal intervention and/or cut in personal income tax rates to put in more money in the hand of consumers appears to be the only short-term solution," said Kunal Kundu, India economist, Societe Generale (PA:SOGN), Bangalore.

However he said the government had limited room to maneuver as the fiscal deficit crossed the full-year target in the seven months to October.

If the RBI does cut rates, it would the sixth consecutive policy meeting that it has done so. The repo rate has fallen 135 basis points so far this year but banks, saddled with about $140 billion in stressed assets, have not cut their lending rates much.

The government is nudging the central bank to set up a fund to buy out stressed assets of the country's top 25 shadow lenders and revive the financial sector, a government source told reporters on Thursday.

Modi is pushing in parliament for labor reforms as well as measures to offer more incentives to attract foreign investors to set up factories in India.

Firms show little appetite to invest due to sluggish domestic and global demand.

In a heated parliamentary debate on the economic slowdown affecting jobs, opposition parties said earlier this week that millions of people had lost their jobs and the country faced an "economic emergency".

Reacting to Friday's economic data, former Prime Minister Manmohan Singh said the sharp fall in economic growth was "unacceptable" given the country's aspiration to grow at 8-9% a year.

Economists said that with persistently tight domestic credit and weak corporate profits, India's recovery could be delayed and the pick-up would remain below potential.

The unemployment rate in October rose to 8.5%, its highest since August 2016, according to the Centre for Monitoring Indian Economy (CMIE) data released earlier this month, though the government estimates that urban unemployment declined.

Government and central bank officials are not sure whether the economic slump has bottomed out as growth slipped for sixth straight quarter.

In the September quarter, private investment grew 5%, up from 3.1% in the previous quarter, while government spending rose 15.6% from 8.8%.

However, capital investment growth slipped to 1% from 4%, indicating that despite rate cuts firms are putting investment on hold, while agriculture grew modestly and manufacturing contracted by 1.0%.

India's infrastructure output contracted for the second consecutive month to 5.8% in October from a year earlier, the lowest since at least April 2012, separate data released on Friday showed.

"While it appears likely that the growth rate has bottomed out especially as the favorable base effect kicks in, extremely weak demand conditions engender a lurking fear of continued weakness in economic activity," said Kundu, the Societe Generale economist.