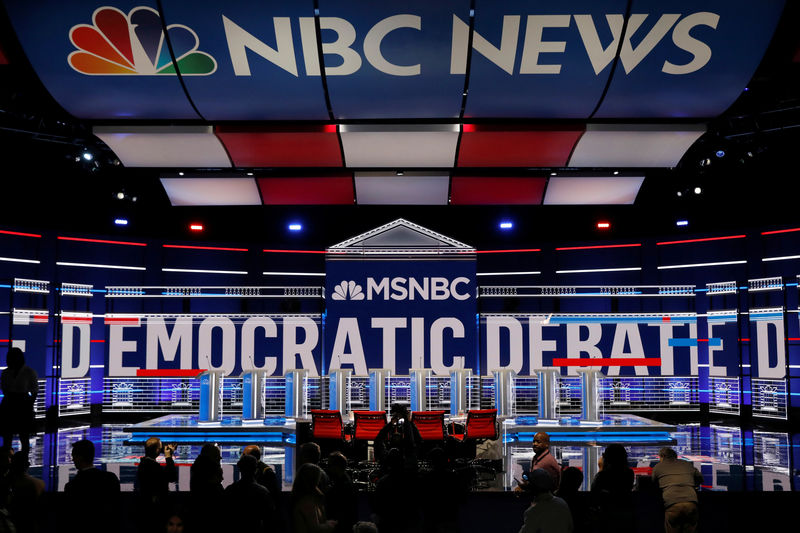 By Joseph Ax and Amanda Becker

NEW YORK/WASHINGTON (Reuters) - A trio of polls released ahead of Wednesday's Democratic presidential debate showed a majority of Americans support Medicare for All, but offered conflicting signals about whether the proposed healthcare overhaul could hurt the party in the November 2020 general election.

As with the previous four debates, Wednesday's televised clash in Atlanta is likely to be dominated by the intra-party battle over how best to expand healthcare coverage to millions of Americans.

U.S. Senator Elizabeth Warren, who has emerged as a top contender to challenge Republican President Donald Trump, has faced criticism from moderate rivals including former Vice President Joe Biden over her Medicare for All proposal, which would eventually eliminate most private insurance in favor of a government-run plan.

In polling data made public on Wednesday, the nonprofit Kaiser Family Foundation found 53% of Americans favored Medicare for All.

However, two-thirds approved of a "public option" plan like that proposed by Biden, Mayor Pete Buttigieg of South Bend, Indiana, and other moderate candidates, which would offer a government plan to compete with private insurance rather than replace it.

The nonprofit Progressive (NYSE:PGR) Change Institute, whose political arm, the Progressive Change Campaign Coalition (PCCC), has endorsed Warren, released its own poll on Tuesday showing that 66% of registered voters nationally - and 63% in political battleground states - support Medicare for All.

The dueling data reflects the extent to which many Americans are still fuzzy on Medicare for All's details, some strategists said.

Democrats took control of the House of Representatives in 2018 powered by victories in moderate districts that were largely credited to the party's disciplined messaging on healthcare. Democratic candidates focused on Republican efforts to dismantle the Affordable Care Act, thereby eliminating protections for people with pre-existing medical conditions.

That contrast has largely faded from the presidential campaign trail, overshadowed by an extended back-and-forth over Medicare for All and its feasibility.

Warren was attacked at the last debate for refusing to say whether her proposal would raise middle-class taxes. She has since issued a detailed plan asserting the overhaul can be paid for by taxing corporations and the wealthy alone while driving down costs. Her rivals have responded by saying that her assumptions are unrealistic.

"It's a little bit of a mystery to me why Democrats want to carve themselves up over health care, an issue they have a big advantage on," said Drew Altman, president and chief executive of the Kaiser Family Foundation.

Some party leaders, including House Speaker Nancy Pelosi, have warned that the focus on Medicare for All could cost Democrats with swing voters next year.

A separate Kaiser survey released on Tuesday of voters in the presidential battleground states of Pennsylvania, Wisconsin, Michigan and Minnesota found that more than 60% of swing voters view eliminating private insurance as a bad idea.

PCCC co-founder Adam Green argued that the public option polls better because voters have heard about it for a decade. Green said the ongoing debate over Medicare for All is a route to build broader support.