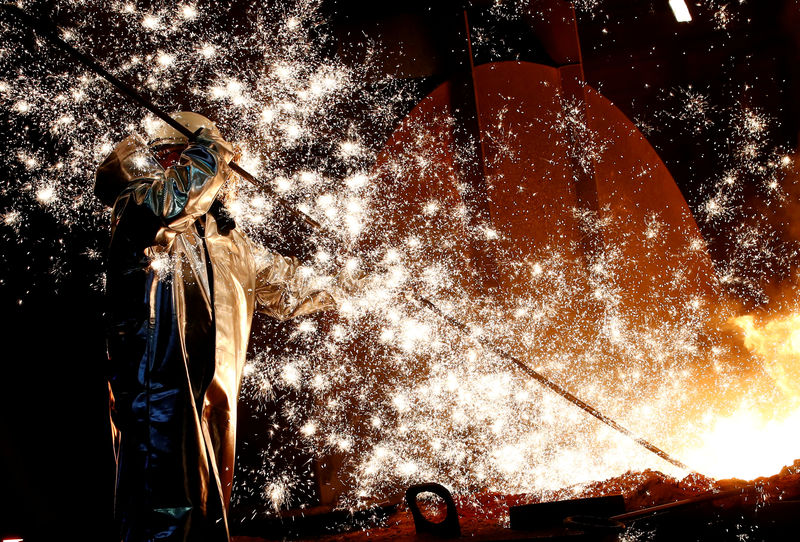 LONDON (Reuters) - The global economy may have narrowly avoided a recession, with most industrial and financial indicators pointing to a slight improvement in September-October after a sharp slowdown in the middle of the year.

World trade volumes were down almost 1.5% in the three months from June to August compared with the same period a year earlier, the worst performance since the recession of 2008/09.

The trade data are the most recent available from the Netherland Bureau for Economic Policy Analysis ("World trade monitor", CPB, Oct. 25).

Since then, however, most equity and bond market indicators as well as industrial production surveys have shown the slowdown has eased (https://tmsnrt.rs/2O1uDoV).

South Korea’s KOSPI-100 equity index, normally a good proxy for trade given the country’s heavy exposure to exports, is up 11% since the end of August and has risen year-on-year for the first time since May 2018.

Caterpillar Inc (NYSE:CAT).’s share price, another bellwether for the global economy because of its central role in the heavy industrial supply chain, is up almost 21% since the end of August and is showing the strongest upward momentum since 2018.

In the bond market, the U.S. Treasury yield curve has un-inverted, with yields on 10-year notes now 23 basis points above three-month bills, from a discount of 52 basis points near the end of August.

The curve normally inverts before a sharp slowdown and then often starts to normalize shortly before the onset of a recession as the Federal Reserve cuts short-term rates.

In this case, however, investors are increasingly confident the Fed’s three interest rate cuts since July will be enough to forestall a descent into recession.

Recent industrial production data from the United States, Germany and Japan all provide some evidence the economy is turning a corner.

U.S. manufacturing output excluding motor vehicles and parts (hit by the strike at General Motors (NYSE:GM)) was down 0.5% in the three months from August to October compared with a year earlier.

But the rolling three-month average improved in September and October for the first time since the start of the year, suggesting that recessionary forces were easing.

Japan’s manufacturing production was down 0.8% in the three months from July to September compared with a year earlier, but the rate of decline was easing.

Germany’s industrial output was also down by more than 4% in July-September compared with a year ago, but again the rate of decline showed signs of easing.

Interest rate cuts, dialled-down trade tensions between the United States and China, and the resilience of the service sector in many countries all seem to have helped keep the global economy from descending into a recession.

There have been negative first-round effects on growth from reduced business investment but, so far, few signs of second-round effects on employment, consumer confidence and household spending.

On most measures, the global economy has escaped recession by a narrow margin, but the nascent re-acceleration is fragile and depends on an improvement in business confidence and investment to become self-sustaining.

The improving outlook for the economy and therefore oil consumption in 2019/2020 has been reflected in higher oil prices and firmer calendar spreads.

Front-month Brent futures prices have moved above year-ago levels for the first time since October 2018, suggesting traders expect the worst of the 2018/19 slump is over.

Brent’s six-month calendar spread, which is probably a better measure for short and medium-term expectations about the production-consumption balance, is progressively tightening.

If the global economy avoids a recession, as now seems likely, the slowdown in U.S. shale production growth and continued output restraint from Saudi Arabia, should reduce the prospective surplus in the oil market next year.