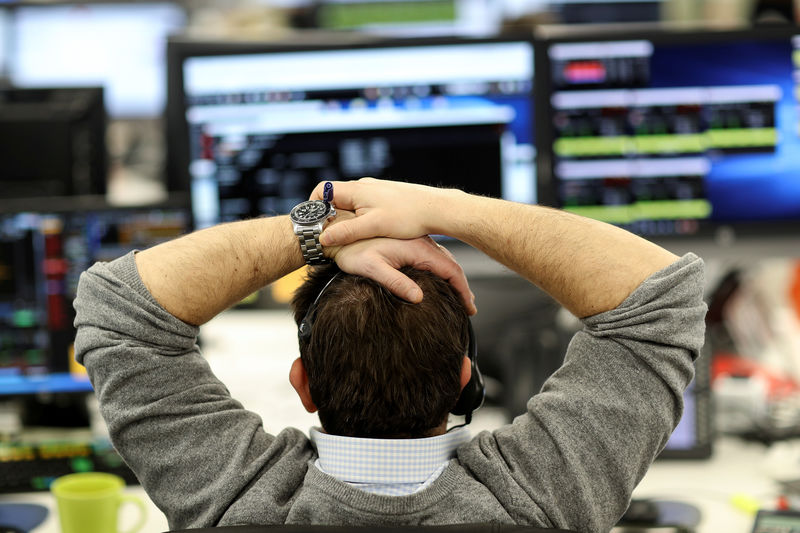 LONDON (Reuters) - World stocks were knocked off 22-month highs on Wednesday as a renewed flare-up in Sino-U.S. tensions and the creeping return of U.S. recession fears fueled a bid for bonds and other "safe" assets such as gold.

European equities tumbled half a percent at the open, edging further off recent four-year highs hit when it had appeared Washington and Beijing were about to agree the first phase of a trade deal. Wall Street futures were marked lower while oil prices suffered their biggest daily loss in seven weeks.

The mood in markets soured after the U.S. Senate angered China by passing a bill requiring annual certification of Hong Kong's autonomy and warning Beijing against violently suppressing protesters. China demanded the United States stop interfering in its internal affairs and said it would retaliate.

U.S. President Donald Trump also threatened to up tariffs on Chinese goods if a trade deal is not reached soon.

"Markets have taken a bit of a wobble due to the talk about Hong Kong, but they had rallied a lot in recent weeks on expectations of a (trade) deal," said Salman Ahmed, chief investment strategist at Lombard Odier.

Ahmed said both sides needed a deal to be signed -- Trump cannot afford a recession because of his re-election bid next year, while China's economy is slowing markedly.

"I think we are looking at a short-term setback rather than a major issue that would derail the process. The bill still has to be signed into law by Trump so there's a high probability he will use it as leverage against China."

Wall Street was tipped for a weaker start with futures (ESc1) down 0.2%.

"It was noticeable that fixed income markets rallied despite equity markets being stable, suggestive of a market that remains cautious about the growth outlook," ANZ told clients.

German bonds fell for the third straight day to touch a 2-1/2 week low (DE10YT=RR), shrugging off European Central Bank Chief Economist Philip Lane's comment that the euro zone economy would not fall into a recession.

"It's all about sentiment on trade ... We have this classical risk-off trade taking place again," Rainer Guntermann, a rates strategist at Commerzbank (DE:CBKG), said.

Moves on commodity prices and bond markets imply fears of economic recession may be creeping back.

Japan's October exports fanned those fears further, tumbling at their quickest rate in three years, with shipments to China and the United States suffering big falls.

A marked flattening of the curve -- the gap between two-year and 10-year yields is at its narrowest in more than two weeks -- also hints at a return of recession fears. The curve inverted earlier this year, returning to normal only after three U.S. interest rate cuts.

But Federal Reserve officials have hinted there will be no further easing for now, a message the U.S. central bank may reiterate later in the day when it releases minutes from its last meeting. Markets are now pricing in just a 0.8% chance of a December rate cut .

Dour forecasts from retailers Home Depot (NYSE:HD) and Kohl's also fueled worries about U.S. consumer spending, which has so far been extremely robust, in contrast to manufacturing.

"We've had a bit of topping out of the U.S. consumer in the past couple of months, possibly we are seeing some catch up between consumer and manufacturing sectors," Lombard Odier's Ahmed said.