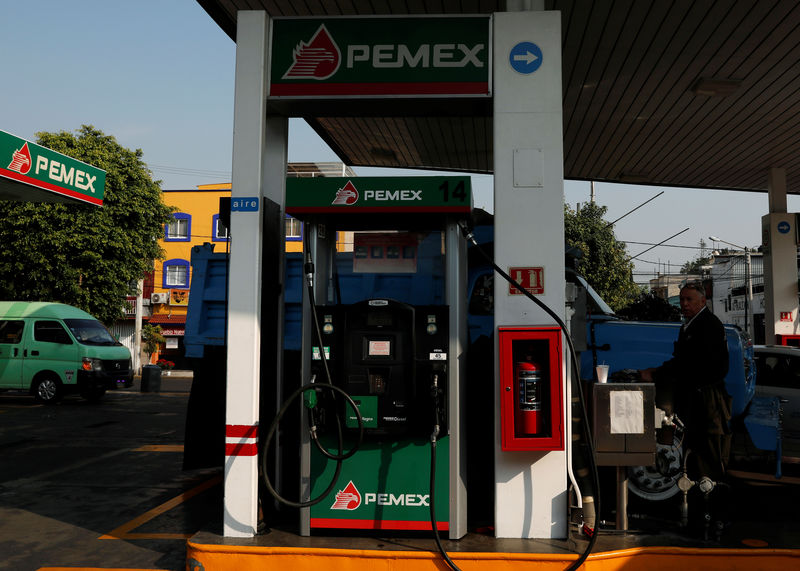 © Reuters. A diesel and fuel pump machine are seen at a gas station, in Mexico City

MEXICO CITY (Reuters) - Mexico's state-run oil company Pemex has been fighting for almost a year in court to suspend a rule issued by the previous government, requiring the nationwide sale of clean diesel to start this year, court documents seen by Reuters show.

Mexico does not produce enough ultra-low sulfur diesel (ULSD) to satisfy the demand the new rule - which was issued by the nation's energy regulator in 2016 - would create, so U.S. refiners started gearing up last year to supply the neighboring country with more clean fuel.

But a district court granted Pemex legal protection in January by suspending enforcement of the rule across most of the country. The suspension limited mandatory sale of ULSD to about 9% of Mexico, including the major population centers of Mexico City, Guadalajara and Monterrey as well as the northern border region.

The court documents, reviewed by Reuters, show for the first time that Pemex is fighting in Mexican courts to indefinitely suspend the rule.

Sticking with high-sulfur fuel would save Mexico money by limiting fuel imports and extending a time-frame for truck makers to install ULSD-compatible engines. However, it risks adding to the perception that President Andres Manuel Lopez Obrador's government is backsliding on environmental commitments.

Pemex argued in the documents that a lack of infrastructure to handle ULSD - which must have a maximum of just 15 parts per million of sulphur - could force Pemex to halt some operations at its domestic refineries.

"(Pemex) does not have (enough) pipeline transportation capacity, storage nor port services to simultaneously import ULSD and send diesel with 500 parts per million through exporting ports," the energy ministry was quoted as saying in one of the documents submitted in court.

The energy ministry and Pemex did not immediately reply to requests for comment.

Pemex's crusade to suspend the rule, which is backed by the ministry, aims to limit more expensive diesel imports and obviate the need for expensive new storage and transportation facilities at a time when the state-run oil company is struggling with a heavy debt and onerous capital expenditures.

But partial distribution of ULSD is unlikely to help tackle pollution, which is a serious problem in several Mexican cities, including the capital. The United Nations this month criticized the Mexican government for stalling "years of progress" towards lower emissions.

Mexico has been importing an increasing amount of U.S. fuel in recent years and Lopez Obrador has pledged to curb the country's fuel reliance by building a new refinery.

The rule also aimed to support separate regulations requiring trucks and buses produced in Mexico to include equipment to run on clean diesel from 2021.

Truck manufacturers want the rule modified so that existing engines can still be produced while new ones using ULSD are gradually phased in, said Miguel Elizalde, president of Mexico's heavy truck makers association.

The industry is meant to make all its vehicles with ULSD- compatible engines, which has created "uncertainty" for transport firms and has put truck sales under pressure, he said.

Monthly wholesale truck sales have fallen up to 61% since July, he said.