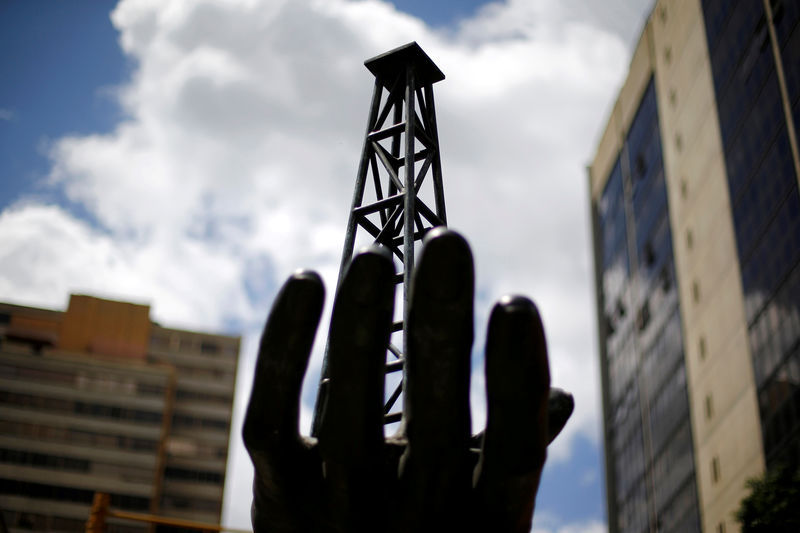 By Mayela Armas and Corina Pons

CARACAS (Reuters) - Venezuela's government and its oil company PDVSA have offered to pay suppliers and contractors into accounts in China using the yuan currency, five people familiar with the matter said.

The move made in recent months is the latest example of how Caracas has sought new ways of making international payments since sweeping sanctions by Washington, intended to force out socialist President Nicolas Maduro, cut off the country's access to the U.S. financial system.

Officials have made the proposal verbally to at least four companies that provide services to the public sector, said the people, including two government officials and three sources from private companies in the financial or oil sectors. The individuals declined to disclose which companies have been approached.

The companies are evaluating the proposal, the sources said. Reuters could not determine whether any such payments in yuan have been made.

The offer comes after Venezuela's government and PDVSA have paid some suppliers and contractors with euros in cash, which they have received from some oil and gold sales, in response to the loss of access to the U.S. financial system due to the sanctions.

Paying suppliers in yuan would allow Venezuela to take advantage of funds it has available in China, without touching the U.S. financial system. However, two of the sources said the process of opening accounts at Chinese banks was proving complicated.

PDVSA and Venezuela's central bank have long maintained accounts in China, in part thanks to a financing deal inked more than a decade ago that saw China lend some $50 billion to the OPEC nation in exchange for crude shipments.

Venezuela's central bank has at least $700 million in yuan in an account at China's central bank, which it received earlier this year as compensation for an oil shipment, according to two people with knowledge of the Venezuelan central bank's operations. Reuters could not independently confirm this.

Receiving payments in foreign currency, or overseas banks, are "the kind of setup that some contractors now have to engage in to get paid," said Raul Gallegos, consultancy Control Risks' director for the Andean region. "This will become standard operating procedure as long as Maduro and U.S. sanctions remain in place."

Venezuela's offer to pay in yuan comes even as some Chinese entities have taken steps to try to distance themselves from the sanctioned country.

China National Petroleum Corp, one of the largest foreign investors in Venezuela's oil sector, in August stopped lifting crude from Venezuelan ports due to worries about sanctions.

Analysts said they expect China's imports of Venezuelan crude to have fallen to zero last month. But China is importing more and more crude blends from Malaysia, which include some Venezuelan oil.