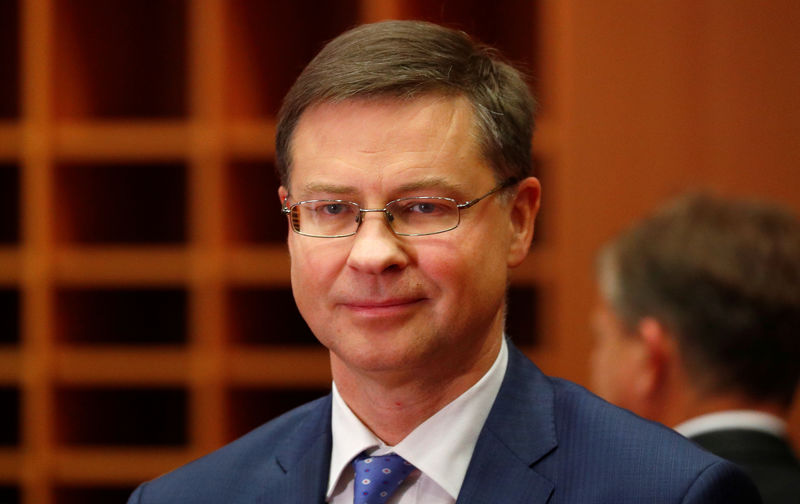 BRUSSELS (Reuters) - The European Commission said on Wednesday that draft budgets for next year prepared by the French and Italian governments were at risk of violating European Union fiscal rules as they could miss their debt and deficit reduction targets.

The EU executive, in charge of monitoring budgets of euro zone's countries, said also the draft budgetary plans of Spain, Portugal, Belgium, Slovenia, Slovakia and Finland were at risk of non-compliance with EU rules.

"Among the budgetary plans found at risk of non-compliance, the ones that concern us most are those with debt levels that are high and not reduced fast enough," Commission Vice President Valdis Dombrovskis said in a statement, explicitly referring to Italy, France, Belgium and Spain.

"We invite all members states that are at risk of non-compliance with the (rules) to take the necessary measures within the national budgetary process to ensure that the 2020 budget will be compliant," he said.

The opinions are part of a regular annual assessment of national budgets. None of the 19 countries of the euro area was found at "serious" risk of breaching EU fiscal rules, the Commission said. That could have led to immediate requests to change draft budgetary plans as in the case of Italy in 2018.

Countries have been often found at risk of breaching EU fiscal rules, but no punitive action has ever been taken by the Commission which favored a lenient interpretation of the rules.

Earlier in November the Commission forecast Italy, which has the largest debt in absolute terms in the EU, would increase its debt burden to 136.2% of Gross Domestic Product (GDP) this year. The debt would continue rising to 136.8% next year and to 137.4% in 2021, the Commission says.

Under EU rules, countries with a debt above 60% of GDP must gradually reduce it.

The EU executive also forecast Italy's structural deficit, which excludes one-off expenditures and revenues and is key in the Commission's assessment, to worsen to 2.2% of GDP this year and 2.5% in 2020, contrary to rules dictating it should improve.

France, which has a debt close to 100% of output, is also spending more this year and is expected to raise its headline budget deficit to 3.1% of GDP, the Commission estimates, above the EU's 3.0% ceiling. The gap would shrink to 2.2% next year and remain at that level in 2021, the Commission said. The debt is also projected to grow this year and 2021.