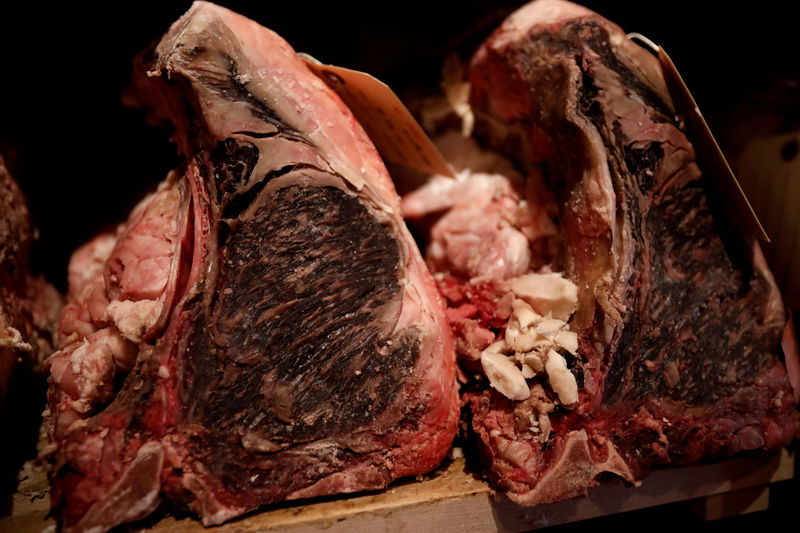 © Reuters. FILE PHOTO: Cuts of USDA prime dry-aged beef are seen in the dry-aging room in the lobby of Gallaghers steakhouse in the Manhattan borough of New York City

But they also criticized tariffs imposed by U.S. President Donald Trump on metal imports and a threat he has made to target EU cars and car parts.

The vote came with a resolution urging the removal of U.S. tariffs on EU steel and aluminum, and the withdrawal of Trump's threat to raise tariffs on EU cars.

The agreement on beef is designed to settle a dispute that dates back to 1981 when the EU banned the use of growth hormones in meat across the 28-nation bloc, including in imports.

The EU and the United States eventually concluded an agreement in 2009 to grant a quota for hormone-free beef imports, which currently stands at 45,000 tonnes.

However, under World Trade Organization (WTO) rules, the quota also had to be made available to non-U.S. suppliers.

Exporters from Australia and Uruguay, and more recently Argentina, decided to sell into the quota, pushing the U.S. share from nearly 100% to 30%.

"THE MESSAGE IS CLEAR"

Under the revised deal, to which the other countries had to agree, U.S. farmers will gain an initial 18,500 tonnes of the quota, rising to 35,000 tonnes after seven years.

"The message of this agreement is clear: we would like to de-escalate trade tensions with the U.S, but we want to see the same efforts of de-escalation on the other side of the Atlantic," Bernd Lange, the head of parliament's trade committee, said in a statement.

The EU lawmakers also called on Washington to work with Brussels to find a solution to a long-running dispute over subsidies to planemakers which has led to WTO cases against Airbus and Boeing (NYSE:BA).

The WTO awarded the United States the right in the Airbus case in October to impose tariffs on $7.5 billion of EU imports. It choose to apply them to French wine, Scottish and Irish whiskies, olives and cheese from across the continent.

The EU expects the WTO to grant it the right to retaliate in the Boeing subsidies case early next year.

The lawmakers also passed a resolution criticizing the United States over its blocking of appointments to the WTO's Appellate Body. The body rules on trade disputes between WTO members and its impending paralysis could end a 25-year-old system to settle trade conflicts.