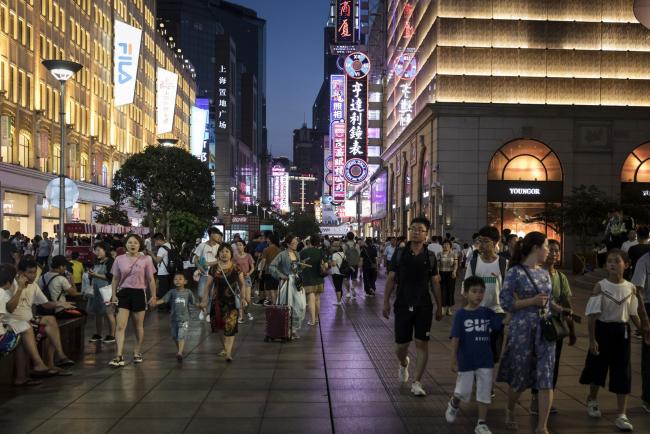 (Bloomberg) -- The earliest-available indicators of China’s economic performance point to a continued slowdown in November.

Economic growth was already the slowest in almost three decades in the third quarter, and Bloomberg Economics’ gauge aggregating the earliest data from financial markets and businesses shows that continuing, with a worsening picture for trade, sales manager sentiment, and factory prices.

While tensions with the U.S. have eased since the two sides announced talks toward a so-called “phase one” deal last month, a leading indicator for trade flows in Asia, South Korean exports, still contracted almost 10% in the first 20 days of November. That’s an improvement from September’s worst result in a decade, but it indicates that high-technology trade across the region is still struggling as the Christmas shopping season approaches.

Profits at Chinese industrial firms fell the most on record in October, dropping 9.9% from a year ago, data from the National Bureau of Statistics showed Wednesday. The decline in prices at the factory gate is one of the factors undercutting those profits and is expected to continue in November, according to a Bloomberg tracker of producer prices.

The falling prices indicates domestic demand is weak. If those deflationary effects continue it will further hurt corporate profits at home and eventually drag down prices and profits overseas as well.

Sales managers at Chinese companies reported the worst conditions on record, with the headline index and sub-indexes for manufacturing and services all below the 50 level that separates growth from contraction. Business confidence was at a 14-month low, and all the gauges for manufacturing dropped from recent months, suggesting widespread problems, according to World Economics, which compiles the data.

“Given weak global demand and uncertainties over trade talk, China’s growth has to rely more on domestic demand. However, worryingly, China’s factory deflation continued and deepened for the fifth month.”

Yet there is some optimism among the parts of the economy most exposed to the global economy. Export-focused firms were more upbeat in a Standard Chartered (LON:STAN) Plc survey of smaller businesses.

“Production activity accelerated as external demand rebounded” while the new orders sub-index for domestically focused smaller companies weakened, Hunter Chan and Ding Shuang from Standard Chartered wrote in the report. “The manufacturing sector outperformed, its performance index rising to a seven-month high, while that of the services sector dropped.”

Iron ore prices have risen recently on optimism for domestic demand next year, with prices of steel rebar, which is used in construction, surging to their highest since May.

Bloomberg Economics generates the overall activity reading by aggregating the three-month weighted average of the monthly changes of eight indicators, which are based on business surveys or market prices.

To contact Bloomberg News staff for this story: James Mayger in Beijing at jmayger@bloomberg.net

To contact the editors responsible for this story: Jeffrey Black at jblack25@bloomberg.net, James Mayger