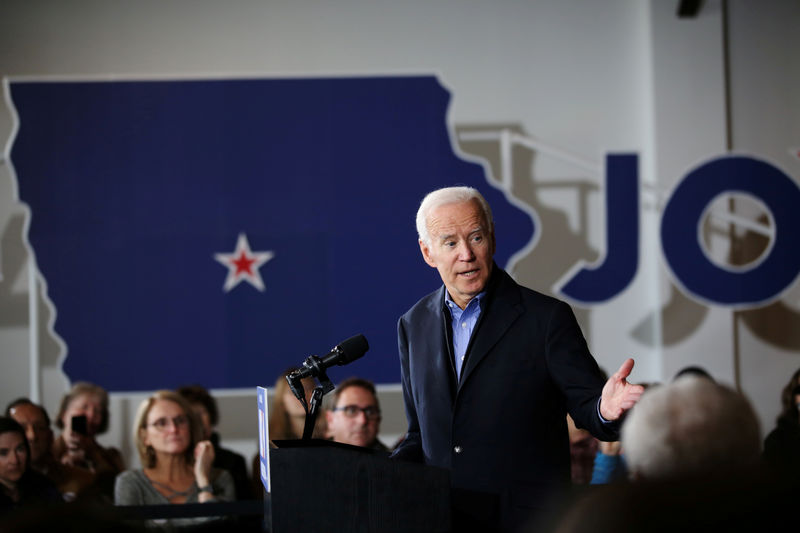 (Reuters) - Democratic presidential candidate Joe Biden will crisscross Iowa by bus for eight days starting on Saturday, the longest trek of his campaign, to make a personal appeal for support in a critical state where he has lost ground in polls.

Biden, who served as vice president to Democratic former President Barack Obama, is seeking the party's nomination to face Republican President Donald Trump in the November 2020 election but is battling a historically large field of rivals, many with better-financed operations.

Iowa, the state that hosts the first nominating contest on Feb. 3, will be a key test. Tom Vilsack, the former Iowa governor and U.S. agriculture secretary, said many of the state's Democrats are still weighing their options.

"They're going to be looking for somebody who, at the end of the day, understands how to move the country forward in a way that's realistic but also progressive," said Vilsack, who endorsed Biden earlier this month.

"It really is time to start turning over our government to a younger generation," said Linda Murken, chair of the board of supervisors in Story County, Iowa, where Biden is expected to campaign on Wednesday. Murken has endorsed Buttigieg, saying younger leaders may inspire younger voters and have a greater sense of urgency about climate change.

Biden campaign manager Greg Schultz told donors earlier this month on a conference call the campaign does not have to win Iowa to secure the nomination. But Biden's fundraising pleas underscore the need to counter a wave of ads in Iowa for Trump and Biden's Democratic opponents.

"Our opponents' advertising blitzes and cash-on-hand advantage have turned into real support for them in Iowa," said one Biden campaign email to supporters last week.

Biden's campaign ended September with under $9 million in cash on hand, trailing Trump, Sanders, Warren, Buttigieg and Senator Kamala Harris, according to the most recent filings with the U.S. Federal Election Commission.

The post-Thanksgiving holiday bus tour by Biden will cover 18 counties and more than 800 miles (1,287 km). Biden is slated to start it with an appearance alongside his wife, Jill, at his campaign's field office in Council Bluffs.

"The goal is to have him connect with people one-on-one," said campaign spokesman TJ Ducklo. "It is a very close race as we get close to voting with the four folks. And that was always the expectation."

Biden won't have the state to himself. Buttigieg, Warren, Sanders, Harris and other candidates are all expected to campaign in Iowa at points during the same eight-day stretch.