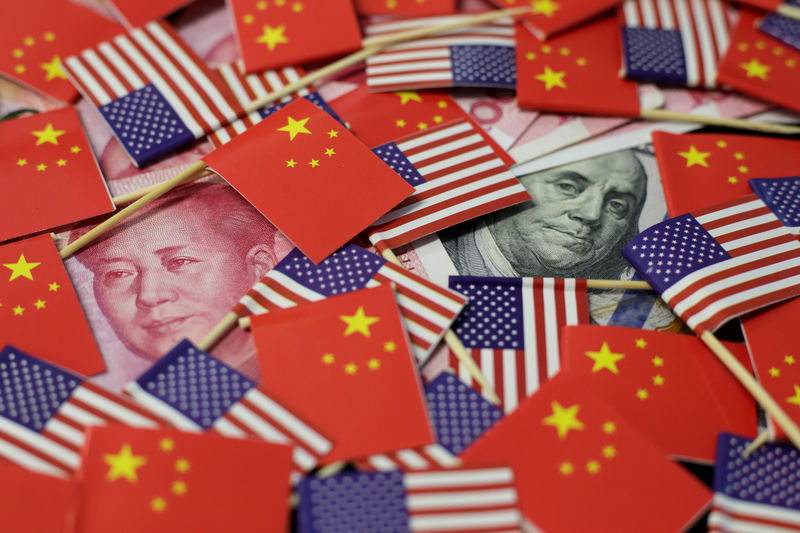 WASHINGTON (Reuters) - A "phase one" trade deal between the United States and China was supposed to be a limited agreement that would allow leaders from both countries to claim an easy victory while soothing financial markets.

But it may morph into something bigger if U.S. President Donald Trump agrees to Beijing's demands to roll back existing tariffs on Chinese goods, people familiar with the talks say.

China's commerce ministry said this month that removing tariffs imposed during the trade war is an important condition to any deal. The demand has U.S. officials wondering if higher Chinese purchases of U.S. farm goods, promises of improved access to China's financial services industry, and pledges to protect intellectual property are enough to ask in return.

Two people briefed on the talks said Trump has decided that rolling back existing tariffs, in addition to canceling a scheduled Dec. 15 imposition of tariffs on some $156 billion in Chinese consumer goods, requires deeper concessions from China.

"The president wants the option of having a bigger deal with China. Bigger than just the little deal" announced in October, said Derek Scissors, a China scholar with the American Enterprise Institute in Washington.

Scissors, who consults with administration officials, said whether Trump will agree to remove existing tariffs depends largely on whether he believes it will benefit his re-election chances. Some White House advisers would like to see China agree to large, specific agricultural purchases, while the U.S. maintains existing tariffs for future leverage.

That would help Trump's farm belt constituency while allowing the president to campaign on maintaining his "tough on China" stance, which holds appeal to voters in key states like Ohio, Michigan and Pennsylvania.

But Beijing is balking at committing https://www.reuters.com/article/us-usa-trade-china-agbuys/trumps-attempt-to-force-feed-china-u-s-farm-products-stymies-trade-talks-idUSKBN1X90BW to a specific amount of farm product purchases, within a particular time frame, and wants to let supply and demand dictate deals instead.

Beijing also wants Trump to eliminate the 15% tariffs on about $125 billion worth of Chinese goods imposed on Sept. 1, as well as provide some relief from the 25% tariffs imposed on an earlier, $250 billion list of industrial and consumer goods.

One Washington-based trade expert said that to achieve the $40-50 billion in annual Chinese purchases of American farm goods touted by Trump in October, he would likely have to eliminate all of the tariffs the U.S. put in place since the trade war started in 2018.

Trump is the final decision-maker in the U.S. on any deal, and hasn't committed to any specifics so far, White House advisers say.

The president said Tuesday that China "is going to have to make a deal that I like. If they don't, that's it."

A 'phase one' trade deal, once expected to be completed within weeks of an October news conference between Trump and Chinese vice premier Liu He, could now be pushed into next year, trade experts say.