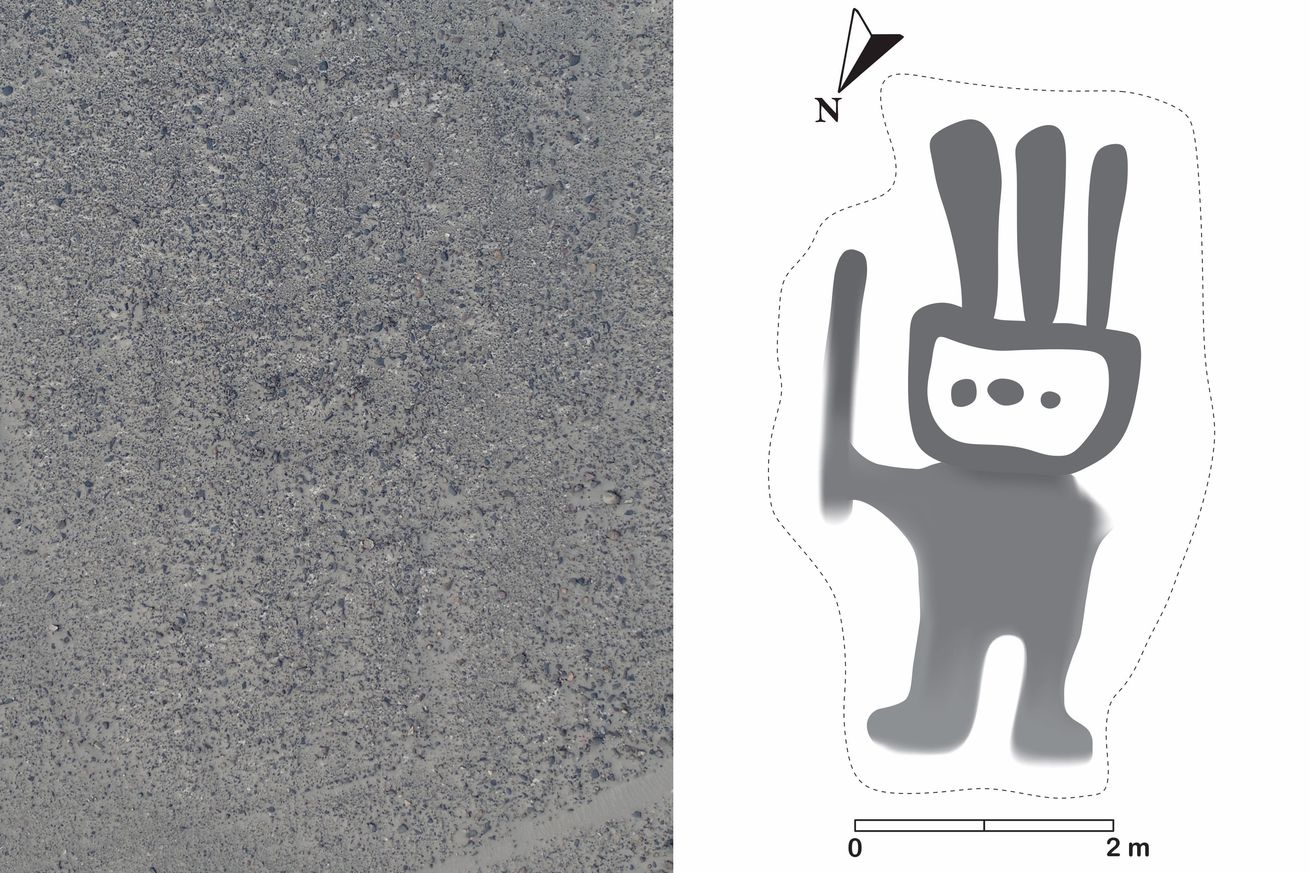 Scientists from Japan have used machine learning for the first time to identify a new figure among the ancient motifs of Peru’s Nazca Lines.

The illustration, known as a geoglyph, is thought to date to between 100 BC and 500 AD, and was made by removing the dark stones of the Nazca Desert to reveal the white sand beneath. It’s small, just five meters in height, and it shows a humanoid figure grasping a cane or club. Like the other drawings in the Nazca Desert, its exact function is unknown, but its discovery next to an ancient path suggests it might have been used as a waypoint.

“It is in an area that we often investigated, but we did not know the geoglyph existed,” Professor Makato Sakai, the leader of a team from Yamagata University that conducted the research, told The Verge over email. “It’s a large achievement.”

The geoglyph was discovered during a larger research project by Yamagata University. Over a decade, using a combination of on-site surveying and aerial imagery, archeologists from the university manually identified 142 new designs in the desert. Then, working with researchers from IBM Japan, they used machine learning to scan the data for designs missed in earlier studies. This revealed geoglyph number 143, our fellow with the cane. It’s the first design in the Nazca Lines to be discovered with the help of artificial intelligence.

The Nazca Lines occupy an area of roughly 19 square miles, and they are thought to have been made over many centuries starting around 100 BC by the Nazca people of modern-day Peru. They were first studied in detail in the 1940s, and by the time they were designated a UNESCO World Heritage Site in 1994, around 30 were identified. They’re remarkably well-preserved considering their age, helped by the desert’s dry climate and winds that sweep away the sand, but are being obscured by floods and human activity.

There are two main variants, known as Type A and Type B. The Type A designs are larger, up to 370 meters in length (1,200 feet), and are thought to have ritual significance, judging by the fragments of smashed pottery found nearby. Type Bs are smaller and older. They include the figure spotted by AI and are thought to be navigational markers of some sort.

This work is another example of how machine learning can help scientists, especially when faced with tasks involving large datasets. Algorithms can be trained to search through certain sorts of information just like humans, looking for patterns and anomalies. Building these tools can be tricky, but once trained, such algorithms are tireless and consistent. They have been used to track down everything from gravitational lenses to earthquakes.

Akihisa Sakurai, a researcher from IBM Japan who was involved in the discovery, told The Verge over email that finding the new geoglyph was a tricky task. The problem, Sakurai explained, was that fewer than 100 geoglyphs were identified, and each is varied in shape and size, making it difficult to teach the algorithm what to look for.

“We specifically built techniques in the deep learning framework to learn and distinguish between these different patterns and sizes of the geoglyphs,” said Sakurai. He explained that even then, the technique was not perfect; the algorithm found “several hundred” candidates for new geoglyphs, which then had to be checked by hand.

The deployment of AI in this study was more of a test than a full-blown project, and IBM and Yamagata have signed a joint agreement to continue their work in this area. Their next step is to aggregate 10 years’ worth of aerial imagery and data to create a new, comprehensive picture of the Nazca Lines. Doing so, said Sakurai, “will give a better worldview of the people who made these geoglyphs and for what purpose.”