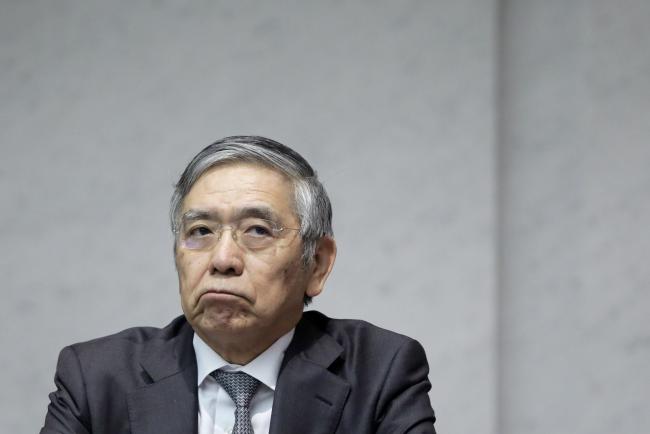 (Bloomberg) -- Bank of Japan Governor Haruhiko Kuroda had a little blast from the past in question time at the nation’s parliament on Friday, with a query about an old rule for monetary policy that fell by the wayside years ago.

It was called the banknote rule, and it said BOJ holdings of Japanese government bonds shouldn’t exceed the value of banknotes outstanding. The idea was it would help to avoid any impression the central bank was directly financing the government. When Kuroda unleashed his first stimulus program in April 2013, he and the board decided to “temporarily suspend” the principle.

Fast forward six and a half years, and “temporary” is looking much like permanent. For the record, Kuroda, responding to a lawmaker at the Diet Friday, said there was no need to reinstate the rule now.

Any immediate reinstatement would be practically impossible. That’s because the BOJ would need to shrink its bond portfolio by some $3.4 trillion to meet it. Its bond holdings total 475 trillion yen ($4.3 trillion) at latest count, versus only 108 trillion yen of banknotes outstanding.

It speaks to the massive expansion of the BOJ’s balance sheet under Kuroda. The governor said back in 2015 that the banknote rule would need to be considered once 2% inflation was reached, but hasn’t much discussed it recently. (Most private economists in Japan don’t ever see the country reaching the BOJ’s 2% inflation target.)

Theoretically, the bank could work off its holdings over time by letting the securities mature, though given the size of the portfolio that would take many years. Another option floated by BOJ watchers is to move a large portion of the assets off the central bank’s balance sheet. The Hong Kong Monetary Authority effectively did that after buying equities during the Asian financial crisis. The HKMA then floated its holdings as a tracker fund.

The BOJ could then look at returning to the old banknote rule. But there’s little likelihood of the debate becoming pressing: Japan’s inflation rate was 0.4% in October, less than a quarter the way to the target.