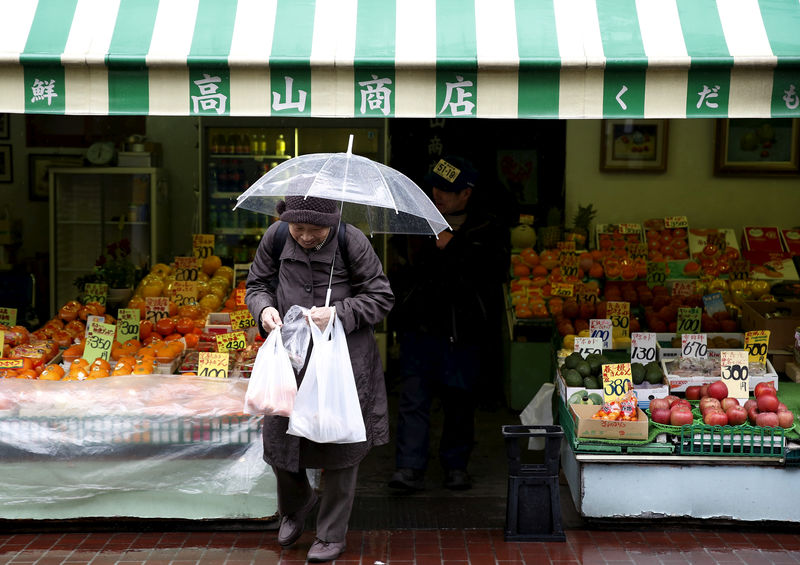 © Reuters. FILE PHOTO: A shopper holding plastic bags walks out from a greengrocer's at Tokyo's Sugamo district, an area popular with the Japanese elderly, in Tokyo

The revised GDP data, to be released by the Cabinet Office on June 10 at 8:50 a.m. Japan time (2350 GMT, June 9), is also expected to show capital spending rose 0.5%, which if realized will provide some cheer given the initial release showed a 0.3% contraction from the fourth quarter.

Partially offsetting that were a downgrade in the contribution of pubic investment and factory inventories from the preliminary reading, analysts predicted.

"If the U.S.-China trade friction intensifies further, the economy may contract as business investment and exports could weaken."

The international trade tensions have weighed on Japan's exports and factory output, raising doubts about whether the government will go ahead with a twice-delayed plan to hike a sales tax to 10 percent from 8 percent in October.

There have been growing calls from some former policymakers to delay the tax hike in the face of worsening domestic and external conditions. However, authorities have said a delay is unlikely unless there is an economic shock on the scale of the collapse of Lehman Brothers in 2008.

The initial GDP had showed imports fell faster than exports in the first quarter, underlining the broadening pressure across the economy as consumers have also been reluctant to spend.

The annualized increase in the growth would translate into a 0.5 percent quarter-on-quarter expansion, also steady from the initial estimate, the poll found.

Other data on tap is unlikely to offer much encouragement to policymakers.

Core machinery orders, which will be issued on June 12, are forecast to have slipped 0.8% in April from the previous month, the poll found, the first fall in three months.

Compared with a year earlier, core orders, a highly volatile data series regarded as a leading indicator of capital spending, likely dropped 5.3% in April, down for four straight month.

"Corporations, especially manufacturers, will continue to be cautious about capital spending on uncertainty over the global economy and the prospect for the U.S.-China trade conflicts," said Yutaro Suzuki, economist at Daiwa Institute of Research.